Much at stake in last Oracle trip 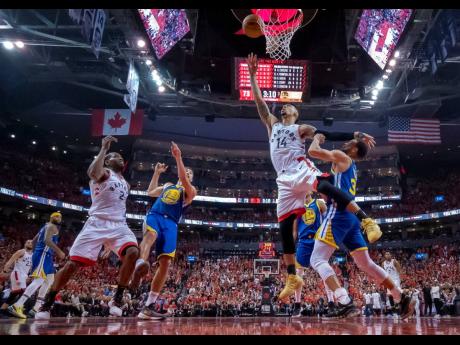 The NBA Finals are making one last trip to Oracle Arena.

For the Toronto Raptors, it’s a second shot at a first championship.

For the Golden State Warriors, it’ll be a night to play for a fallen teammate and the fans they’re leaving behind.

Game 6 is tomorrow, and the stakes could hardly be higher.

There have been so many already during Golden State’s stretch of five straight trips to the NBA Finals, the second-longest run in NBA history. But few had all the drama and emotion that will fill the Oakland air tomorrow.

Toronto will bring a 3-2 lead into the building and try again to win a title that seemed so close in Game 5. The Raptors had a six-point lead with less than three minutes remaining Monday, poised to put an end to a Golden era in the NBA. Then Thompson and Stephen Curry rallied Golden State to a 106-105 victory, fuelled by three straight 3-pointers.

“Come out and do the same thing. Just be mentally focused, try to limit our mistakes, and be the aggressor,” Kawhi Leonard said. “Just play hard 48 minutes and see what happens.”

It’s the last game in the arena before the Warriors move to the new Chase Center in San Francisco and the first one for Golden State with the knowledge that Kevin Durant won’t be back this season. The two-time defending champions began the series hoping he could return from a strained right calf, but not long after he did, he was lost in the second quarter of Game 5 with an Achilles tendon injury.

Centre Kevon Looney also went out again, so the Warriors are nowhere near full strength as they make their final stand.

They can’t worry about that now.