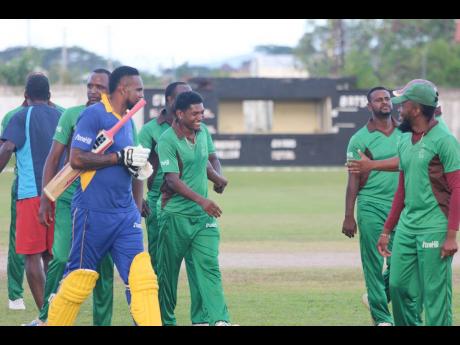 Captain Santokie bowled the crucial super over to guide Clarendon to victory over St Elizabeth Cricket Association at Chedwin Park in St Catherine.

The win enabled Clarendon to top Zone B with 12 points, four ahead of Manchester, St Elizabeth and St Catherine CC, who all finished the preliminary round on nine points.

In an enthralling encounter, St Elizabeth took the first strike and posted 152 for four from their allotted 20 overs, with Kerry Holness top scoring with 75 not out from 55 balls. He got good support form Christopher Dyer, who was left unbeaten on 51 from 42 balls, as the pair shared in a 116-run-fifth wicket partnership.

Santokie finished with three for 25 from four overs for Clarendon who replied with 152 for six, also in 20 overs. Errol Thomas was the hero for Clarendon as he hit the final ball of the innings for six off pacer Jermaine Levy to tie the match.

Thomas ended on 42 not out, while Santokie contributed 29.

In the super over, Clarendon posted 19 without loss, with Thomas getting nine and Santokie seven off medium pacer Andre McCarthy.

In their turn at bat, St Elizabeth could only manage 14 for one, with Santokie using his experience to restrict the St Bess team.

For Santokie, it was a well-deserved victory.

“This is a great reward for all the hard work that we have put in this season. we have always played good cricket, but we always miss out by an inch. This time, we executed in all departments to come away with the victory.”

Clarendon, who won four of their five games in Zone ‘B’, are expected to face the University of The West Indies (UWI) in one of the semi-finals.

The UWI are expected to top Zone D with 11 points as they should get full points from their abandoned game against Portland, who failed to prepare the pitch at Folly Oval. At press time officials were still deliberating on this matter.