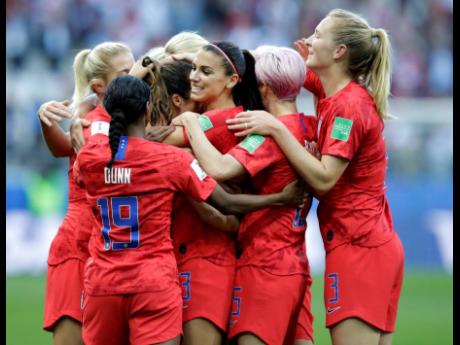 Alessandra Tarantino
United States’ Alex Morgan (centre) celebrates after scoring the opening goal during their 13-0 rout of Thailand in Group F of the FIFA Women’s World Cup at the Stade Auguste-Delaune in Reims, France, yesterday.

Alex Morgan tied a tournament record with five goals and the defending champions, the United States (US) national team, opened Group F of the FIFA Women’s World Cup (FWWC) with a historic 13-0 rout of Thailand yesterday.

Samantha Mewis and Rose Lavelle each added a pair of goals for the US, who broke the record for goals and margin of victory in a FWWC game. Lindsey Horan, Megan Rapinoe, Mallory Pugh and Carli Lloyd also scored. The previous record margin was Germany’s 11-0 victory over Argentina in 2007.

Morgan tied Michelle Akers’ record for FWWC goals, set in the quarter-finals against Taiwan in 1991.

“We really just came into the game really wanting to showcase ourselves,” Morgan said. “Every goal matters in this tournament, and that’s what we were working on.”

Asked repeatedly about the lopsided score, US coach Jill Ellis wondered if a 10-0 victory in a men’s FIFA World Cup would elicit the same questions.

“Getting off on the right foot is important,” Ellis said. “But we also feel like we’ve got more to do. So were going to stay humble and go back to work.”

The two teams were the last to kick-off in the group stage for the month long tournament. Hosts France opened the FWWC before a sold-out crowd in Paris on Friday night with a 4-0 victory over South Korea.

Ranked No. 1 in the world, the Americans had dropped only one match in their previous 38, a loss to France in Le Havre in January. The team is 7-1-2 overall this year, with six straight wins going into the FWWC, and their seven ­different scorers against Thailand set a record for most in a FWWC game.

The last time the Americans played on the world’s biggest stage, Lloyd had a hat-trick in the first 16 minutes and the US beat Japan 5-2 in Canada for the trophy.