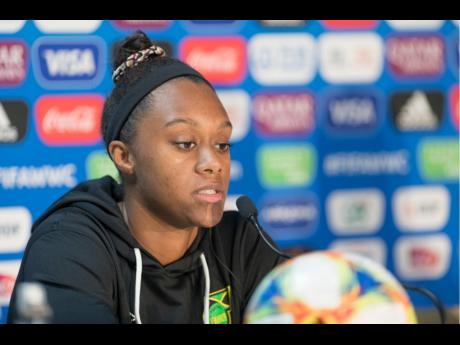 Allyson Swaby responds to questions from the media during the Jamaica official press conference and stadium familiarisation at Stade Auguste-Delaune in Reims, France on Thursday June 13, 2019 ahead of Jamaica's second match in the FIFA Women's World Cup against Italy. 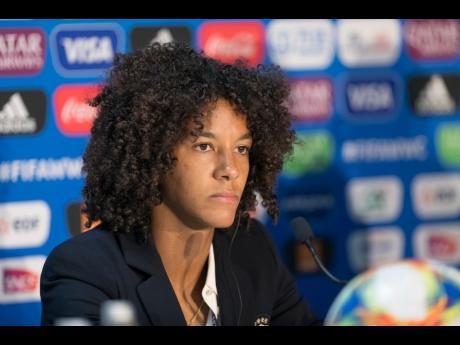 Reggae Girlz head coach Hue Menzies is hoping the presence of Italian-based Jamaicans Allyson Swaby and Trudi Carter, will help his team in their FIFA Women’s World Cup match at the Stade Auguste-Dalaune in Reims, France on Friday.

Swaby and Carter both play for Italian club AS Roma, which has three players in the Italian squad and the Jamaican coach said on Thursday, during a press conference at the match venue, that the pair’s knowledge of Friday’s opponents bring significant value to their preparation.

"There is some familiarity out there for some of the players and they can bring that into the team. It's a plus when you have players playing in the same league as the team that we are playing against,” said Menzies.

Menzies underlined the strength of the Italians, who surprised Australia 2-1 in their opening game, but warned that the Jamaicans are more than equipped to cause them some trouble as well.

“Italy is a very disciplined team, they protect their box. Obviously the #11 (Barbara Bonansea) up top is a fantastic player, she can play either side so we will keep an eye on her. But they have some areas where we can exploit,” added Menzies.

Swaby noted that the she is looking forward to facing the Italians and that the team is hoping to make right, the mistakes they made against Brazil in their opening game.

“I think we are more comfortable now a lot of the mistakes me made against Brazil are fixable and we are eager to move forward,” said Swaby.

Meanwhile, Italian captain Sara Gama noted that the Italians were well aware of the Jamaicans’ abilities and made it clear that they would not be taking anything for granted despite their strong start to the competition.

“We are not looking backwards, we are looking forward and we won’t underestimate the Jamaicans players because they have significant individual talent so we will need to show up technically and tactically to come out on top. We don’t want to talk ether risk of underestimating them, we are aware we have won a match but we need to keep winning if we are to make it to the Round of 16,” said Gama.