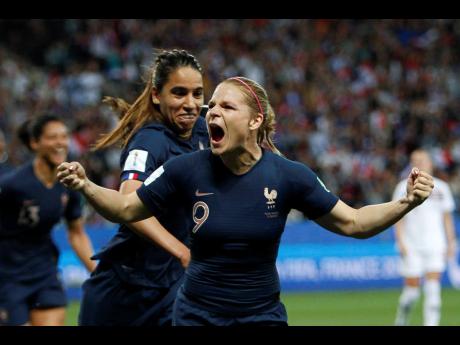 France recovered from an own goal to beat Norway 2-1 yesterday as the host nation remained undefeated at the FIFA Women’s World Cup.

Eugenie Le Sommer scored the winner from the penalty spot in the 72nd minute after video review determined that Ingrid Syrstad Engen had fouled Marion Torrent in the area.

Valerie Gauvin, benched in France’s opening 4-0 win over South Korea, broke the deadlock after halftime, but Norway tied when Wendie Renard turned a cross into her own net.

Renard, considered one of the best defenders in the world, appeared to be in tears as she raised her face to the sky in anguish.

France moved three points ahead of Norway in Group A. Nigeria were also three points behind France, who are vying to become the first nation to hold both the men’s and women’s World Cup titles at the same time.

Norway, who won the competition in 1995, are playing without Ada Hegerberg. The 2018 FIFA Ballon d’Or winner stepped down from the national team because of what she says are differences in the way the federation treats the men’s and women’s teams.

In the other Group A game yesterday, Kim Doyeon, with an own goal, and Asisat Oshoala gave Nigeria a 2-0 win over Korea Republic, while Sara Daebritz gave Germany a 1-0 win over Spain in Group B.