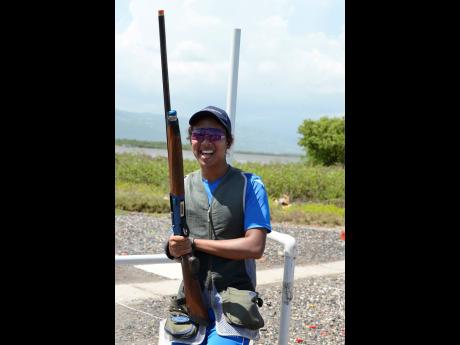 Hillel Academy and National Commercial Bank (NCB) Junior Sporting Clay Open highest overall winner Cameron Phang Sang said that victory at Sunday’s tournament at the Jamaica Skeet Club was due to hard work and mental toughness. And after claiming his first highest overall success, he now has the confidence to go out and win more.

But after claiming his first win, Phang Sang said it was “significant”, and that practice was essential. However, key to his victory was his focus under harsh conditions and against tough opposition.

“It’s (win) really special,” he said. “It wasn’t easy, and it never is, because everyone here is so good, so talented. But there is only so much pure talent can get through. You have to practice, you have to be shooting all the time. But it’s also about having the right mental game because a lot of it is the mind. It’s all about the mind and how you’re feeling that day.”

He noted that in 50 birds, like what the juniors contested, it’s easy to keep focus, but a hundred birds requires a lot more mental fortitude. “It was really hot (Sunday), and all that fatigue can just come down on you. So you have to keep your mind focused, sharp, and stay true to what you are doing,” he told The Gleaner.

For the Girls A title, Savannah Miller with 82, beat Abigail McMaster (80). Hillel also retained the team title after compiling 284 to Jamaica College’s 260, and Campion’s 258. Captain Phang Sang was pleased they did as well as they did with the limited practice they had.

“Today, we came and did what we had to. Some people didn’t get to practise as much as they wanted, but we still won and cleaned up a few trophies, so I am happy with the team performance,” he said.

Zachary Chen (93) and Matthew Joseph (92), were second and third, respectively, in the 17-20 category. Tony Hugh took the junior A section ahead of Denoes and Tavares-Finson. Thomas Gore, with 89, won the Junior B category, and Bradley Wright captured the Junior C title.