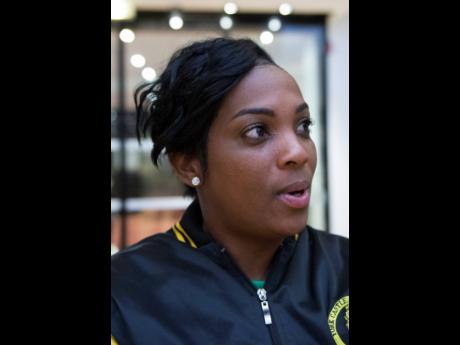 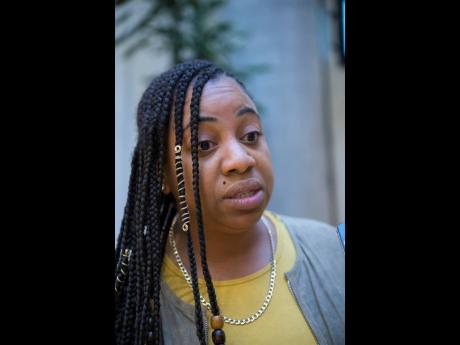 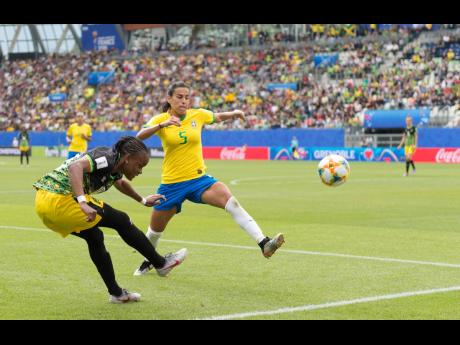 Gladstone Taylor
Jamaica winger Trudi Carter (left) whips in a cross before Brazil’s Thaisa could raise her leg to block it during the teams’ opening Group C encounter at the FIFA Women’s World Cup at the Stade des Alpes in Grenoble, France on Sunday. Gladstone Taylor/Multimedia Photo Editor
1
2
3

Jamaica’s participation at the FIFA Women’s World Cup continues to pique interest, but for two fans here in France, seeing the Reggae Girlz compete on the biggest stage in women’s football brings a special feeling of fulfilment.

Their sacrifices and determination helped to lay a platform on which the sport has grown slowly among females over the years, and as the current crop of Reggae Girlz continues to make a name for themselves, while rubbing shoulders with the world’s elite, two pioneering female footballers, Sanya Delgado-Boyd and Tasha Baxter, took time out to consider their impact, juxtaposed against a past when women’s football was anything but fashionable.

‘Prouder to be a Jamaican’

“Exciting does not begin to describe the feelings I have right now,” said Delgado-Boyd after watching the team’s 3-0 loss to Brazil in Grenoble on Sunday. “Proud is maybe the best word to use because I know where we are coming from and to see where we are now, I mean, it really makes me even prouder to be a Jamaican and, more so, a female who has played football. To see where these girls have come from and where they are now, I am extremely proud.”

Delgado-Boyd, now 36, started playing football as a student at St Hugh’s Preparatory. Back then, as it still is to a much lesser extent in Jamaica, this was not something that people were accustomed to or encouraged.

“I started playing with the boys and I started with the Milo Cup. I was the only girl on the team and yes it sparked everyone’s interest because it was not something that people often saw,” Delgado-Boyd reminisced.

She later went to Immaculate High, but what some thought was a passing fad, proved to be a persistent, lingering obsession. The problem was, at that time, Immaculate did not have a female football team, so there was no way for her to continue feeding her interest and growth as a footballer.

She would, however, make a way.

“When I went on to Immaculate, I was still interested in football, but they did not have a team at the time, but through a lot of coordination, Immaculate was able to have a team. I was the captain of the team, I played in the inaugural schoolgirl competition and my love for football just grew from there, where I went on to play for United Strikers and then I migrated to the US and continued playing there,” she added.

Pivotal for her, is the role that the current crop of national women footballers play in influencing future generations of Reggae Girlz.

“I don’t even think any of us really understand the impact that they will have on girls. For me, when I started playing, I didn’t have any girls to look up to and we were even discussing how (American women’s football legend) Mia Hamm impacted us, and to know that young girls in Jamaica won’t have to look outside their own nation or their little communities to be inspired. You don’t have to look to US or Brazilian players. There are Jamaican players who they can look up to, see what they are doing and I think that this is very important,” said Delgado-Boyd.

For 38 year-old Baxter, watching the Girlz compete at the World Cup was an emotional experience and one that she thinks will have far reaching effect on other small nations, looking to develop the women’s game.

“I think a lot of other countries will try and have a strong female football programme now, I think others will look at Jamaica and say that if we can do it, they can as well. I think other nations will look at us and be pushed by this,” said Baxter, a former national player herself.

Baxter first got the idea to get involved with the sport, while a student at York Castle High school in St Ann. As a devout supporter of her school’s daCosta Cup team, Baxter felt it was necessary for girls with a similar interest, be given the chance to learn the game and develop their abilities. Eventually, the daCosta Cup coach would agree to help start a female programme and this led to the formation of York Castle High’s first ever female team.

“It was a joke at first, nobody believed we would do it, but we got it started in 1998,” Baxter said.

She would later get scouted and drafted into the national team by Elaine Walker-Brown, the Jamaica Football Federation’s Women’s Committee chairperson.

“It was hard at that time, the funding wasn’t there, but we did our best and to look at the Reggae Girlz now 20 years later, it’s unbelievable and is a goosebumps kind of moment for me. They are already winners in my eyes, they have come so far, we can’t ask for anything else,” Baxter beamed.

Jamaica’s next game will be against Italy tomorrow at the Stade Auguste-Delaune in Reims.