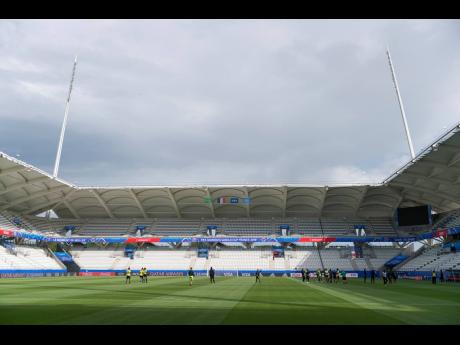 Gladstone Taylor
Jamaica’s Reggae Girlz familarise themselves with the playing surface at the Stade Auguste-Delaune in Reims, France, yesterday. The team faces Italy in their second Group B fixture of the FIFA Women’s World Cup at the venue at 11 a.m. this morning. 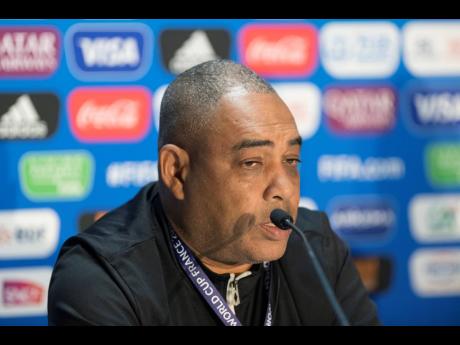 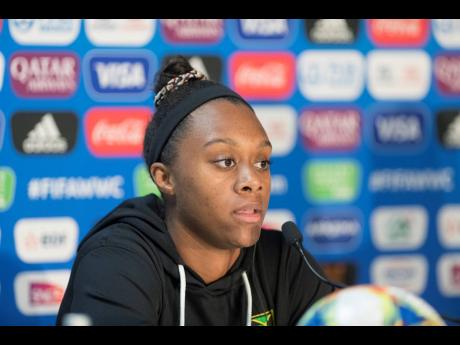 When Jamaica face Italy today at the Stade Auguste-Delaun, in their second ever match at the FIFA Women’s World Cup, there is the feeling that a lot more than a place in the Round of 16 is at stake.

The Jamaicans will need to pick up a positive result against the Italians if they are to continue harbouring hopes of extending their stay in France beyond next Tuesday’s final group game against Australia.

However, for the Girlz, this is just a part of the objective here at the World Cup.

Of equal, or perhaps greater importance, is their ambition to have a positive impact on the sport’s growth among females back home. Getting points against a traditional footballing powerhouse, fresh off a statement 2-1 win over Australia in their opening game, will not be an easy task for the Jamaicans, but as the build-up to today’s clash hit a crescendo yesterday, it was quite clear that the Reggae Girlz and those closest to them were well aware of the rich value of their performances here.

“In Jamaica, the two main sports that women play are track and field and netball,” said Italy-based Jamaican defender Allyson Swaby, who herself started out away from the football field, playing netball.

“It’s a cultural thing, it is what has been accepted, or what was accepted first, and right now, we are working to bring acceptance to women’s football,” Swaby added. “Every time we go back to Jamaica, we fill those stands a little bit more, and this proves that we are getting a job done – slowly but surely. The more our faces are out there and the more people can see that we are doing this, that it’s a career and not a hobby, the more accepting people will become of it.”

A win or draw against the Italians will certainly help as well.

Jamaica are desperate to get the party started on their FIFA Women’s World Cup debut after a largely flat showing in their opening match against Brazil, resulting in a 3-0 loss. The Brazilians yesterday fell 3-2 to Australia, meaning that every team in Group C, except Jamaica, is on three points ahead of today’s contest.

Head coach Hue Menzies, while underlining the importance of the Girlz’s appearance and performance in France towards the lifting the women’s football ­programme in Jamaica, is approaching the game with calm, and seemed quite certain that his team is ready to turn in an impressive performance against Le Azzurre.

“… Culturally, we have an issue (women’s football),” Menzies said. “It’s our time to change that. That’s why we are here and, hopefully, when we go back to Jamaica, that whole aspect of women playing will change, and that’s one of the main things that (sponsor) Cedella (Marley) wanted to change – the whole mindset of how people perceive women’s football.”

The Italians are yet to lose a match in 2019, winning eight of their 10 games played this year while conceding only nine goals and helping themselves to 27.

Menzies is well aware of their strengths but remains confident that the Jamaicans can come good against the Europeans and is expecting them to react to the defeat against Brazil after the adjustments that have made.

“Without giving too much away, obviously, they (Italians) are very disciplined. They are typical Italians. They know how to protect their box. They do a really good job of identifying dangerous areas and, hopefully, we can exploit those areas. The number 11 (Barbara Bonansea) up top is a fantastic player. We think she is dynamic. She can play on either side of the pitch, so obviously, we have to keep our eyes on her. I do think, though, that they have some areas that we can exploit with our athleticism. So hopefully, we will have a good game against them,” Menzies said.

Swaby, the AS Roma defender added: “We know that they will want to possess the ball and that they will be very compact from top to bottom, so for us it is important to capitalise on any chances and opportunities that we get. We don’t know how many there will be, but we have to make sure that we are efficient and also limit their chances.”

Following the opening game, the coach pointed to a lack of enterprise in his midfield and singled out second-half substitute Chinyelu Asher for her injection of energy into the engine room on her introduction. The 26-year-old is certainly a strong candidate for a start against the Italians as the Jamaicans look to turn a few knobs and get their campaign going in France’s north.

Swaby believes that the team is revved up and ready to show their abilities against Italy, having become more comfortable with the environment of a FIFA World Cup fixture and after assessing their performance and identifying their mistakes.

“I definitely think we are more comfortable now because a lot of the errors that we made we were able to see on tape and they are fixable. They are nothing that we can’t control. So being able to look back and see a lot of the things that led to our downfall will give us confidence moving forward,” Swaby said.

There is a minor doubt around captain Konya Plummer, who picked up a knock and who is, of course, on a yellow card from the Brazil game.

Meanwhile, Italy’s head coach Milena Bertolini says their focus is to make it through to the next round, and they are aware of the dangers posed by Jamaica.

“The players all look focused, and they know it is important to stay switched on. The next game is always the hardest game, and this game is a potential banana skid. It’s easy to take Jamaica for granted, but our target is the next round, and we will not make that mistake,” said Bertolini.

Captain Sara Gama added: “This game is crucial against a team that is very quick and physical. They have significant individual talent, and we will need to show up technically and tactically to come out on top. We don’t want to run the risk of underestimating. We have already won a match, but we want to keep winning if we are to make it to the Round of 16.”