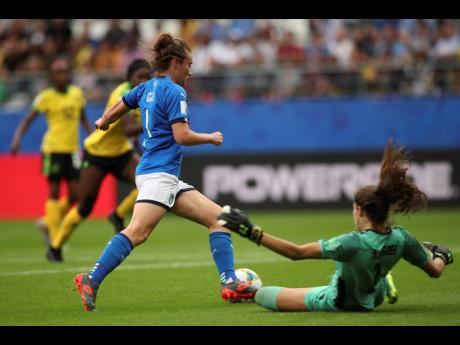 Jamaica's Reggae Girlz went down 5-0 to Italy in their crucial Group C game in the FIFA Women's World Cup in Reims, France this afternoon.

Sashana Campbell, playing in an unfamiliar right back role, gave away the ball away, forcing Allyson Swaby into a tackle in the box. Referee Anna-Marie Keighley had initially thought the tackle was legal, however the video assistant referee (VAR) ruled that Swaby did not play the ball and a penalty was given. Sydney Schneider, like she did against Brazil on Sunday, made a save from Cristiana Girelli but (VAR) came into play again and ruled that both her feet came off the line as she came forward for the save to her left.

Girelli, on the retake, put her shot to Schneider's right this time, to put the Italians up 1-0 in the 11th minute.

Fourteen minutes later, Italy won a corner and poor organisation in the box from the Jamaicans saw Girelli grab her second of the game when a loose ball brushed off her hip and into the net from roughly six yards out.

Immediately after the half time restart, a mistake down Jamaica's left hand side allowed the Italians to play a cross in. The ball was fumbled by Schneider and Girelli was on hand to head in for her hattrick.

The goal of the game came when substitute Aurora Galli fired a thunderous strike from just outside the box in the 71st minute. Schneider got a hand to it but could not prevent the ball from flying into the roof of the net. Galli made the score 5-0 10 minutes later after rounding Schneider to tap into an empty net.

The Jamaicans have now lost two games, and conceded 8 goals without scoring any. Their final game of the group will take place at the Stade des Alpes in Grenoble, France, when they play Australia on Tuesday at 2 p.m. Jamaica time.