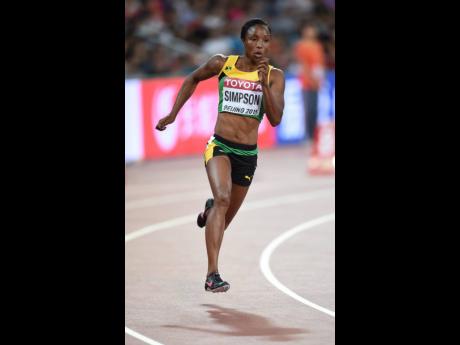 On the upcoming episode of ‘The Drive Phase’ podcast, I sit down with Olympian Sherone Simpson and discuss her exploits over the past two decades competing and representing Jamaica. I thought I would also use this space to examine her amazing track and field journey.

You get the sense that she is in the twilight of her career, and at some point, will be hanging up her spikes. It may not be the end of the year, but I can assume any time between now and the end of next season. So while the headlines no longer carry her name and her many successes, I still believe that she is one who deserves a lot of credit for Jamaica’s track and field success.

The very jovial Simpson has many achievements, which include the famous joint 100m silver medal at the 2008 Beijing Olympics. Additionally, the former MVP Club athlete has an Olympic gold and another silver medal in the 4x100m relay. This is coupled with her two IAAF World Championship silver medals and silver at the IAAF World Relays. In all of that, she says that her most memorable race was the 10.95-second clocking over 100m at the 2015 Pan American Games in Canada, which earned her a gold medal.

It is easy to forget about these achievements, as well as the many other national titles and one-day meeting wins in this era dominated by Olympians Shelly-Ann Fraser-Pryce and Elaine Thompson. We are so lucky with an abundance of talent that very often we forget that we still have other fantastic athletes in our midst. The truth is that Sherone may struggle to run that fast again, and to be honest, it will be tough getting anywhere close to those times. She credits national coach Maurice Wilson and his SprinTec Track Club for her resurgence, as well as for her being able to compete at the top level at 34 years old, especially after the birth of her daughter, and that is good.

If we think about it, Sherone Simpson and Kerron Stewart are two athletes who have really helped to build this Brand Jamaica, along with the current stars; and while she may not get her own statue at Independence Park, my hope is that we will spend some time acknowledging and rewarding her for the way she has represented us over the years. She has donned the national colours in the 100m finals of the 2004 Olympics and 2005 World Championships, followed by a very good 2006 season. In that year, she got the better of Marion Jones twice, as well as Allyson Felix. At the 2006 Melbourne Commonwealth Games, she ran 22.56 seconds to defeat Jamaica’s darling of the track at the time, Veronica Campbell-Brown. Overall, she has represented the country at three Olympic Games and many other major championships, and at one point was a regular on the IAAF one-day meetings circuit.

It is inescapable that she will always have that cloud over her head – that adverse analytical finding that she returned in 2013. While we all know that she was not trying to cheat the system, it is something that she will have to deal with, and she has managed to use it as a personal story for young athletes, something from which everyone can learn.

What many may not remember is that Sherone has endured many injuries and surgeries, the adverse analytical finding, and taking a break for pregnancy and still manages to compete. That speaks to her resilience and shows that she has consistently worked hard.

The JAAA National Senior Track and Field Championships start in another week’s time, and surely, we will see her try to make yet another senior team. With the Lima Pan American Games and Doha World Championships later this year, her determination makes her one you can never count out. I will be at the National Stadium and still cheering her on because she is a gem.