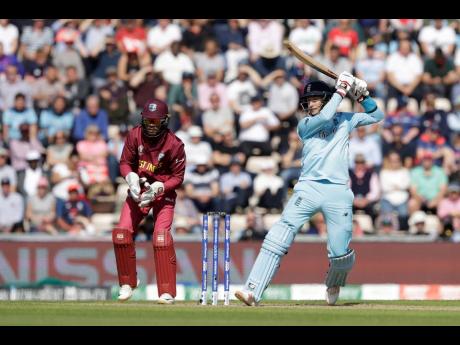 The sun appeared after a week of gloom and shone on England, giving the ICC World Cup hosts perfect batting conditions to chase down a meagre Windies target and clinch an eight-wicket win with almost 17 overs to spare yesterday.

Joe Root was able to get on the front foot to nullify any threat of an expected barrage from the Windies pace attack and scored an unbeaten century to guide England to 213-2 in reply to 212.

Root also took two wickets – both caught-and-bowled – and Barbados-born Jofra Archer took 3-30 after England skipper Eoin Morgan won the toss and gave his bowlers advantage of the early cold, overcast conditions by sending the Windies in to bat.

“I think as a whole today, we were brilliant,” Morgan said. “Joe has had an absolute day out. He’s the glue that holds everything together.”

For a change, there were no rain interruptions after bad weather plagued the tournament earlier in the week, causing three games to be washed out.

While the weather report was OK, the news wasn’t entirely good for England. Morgan hobbled off in the 40th over after experiencing muscle spasms in his back. And big-hitting opener Jason Roy strained his left hamstring while fielding in the eighth over and didn’t re-enter the game.

Morgan said Roy would have scans on the hamstring. Both players will be treated and reassessed within 48 hours.

Roy wouldn’t have been allowed to bat any higher than No. 7 as a result, anyway, and that gave Chris Woakes a chance to bat up the order in the reshuffle.

Root scored 100 off 94 balls, his second century of the tournament, to become the leading scorer in the World Cup so far. He shared a 95-run stand with Jonny Bairstow (45) and combined with Woakes (40) in a 104-run second-wicket partnership. Shannon Gabriel took both wickets.

Woakes (1-16) was in the thick of the game early, removing Windies opener Evin Lewis (2) in the third over as the ball seamed around in the moist air.

He also had Chris Gayle dropped by Mark Wood at third man when the dangerous Windies opener was on 15.

Gayle went on to set the record for most career runs in One-Day Internationals (ODI) between the Windies and England, passing Viv Richards’ record of 1,619 when he stroked Woakes for a boundary.

But the 39-year-old left-hander was out for 36 from 41 balls – setting the bilateral run record at 1,632 – when he pulled Liam Plunkett into the deep and Bairstow took a running catch. When Shai Hope (11) was out two balls later, the Windies were 55-3 and had to rally around an 89-run fourth-wicket stand between Nicholas Pooran (63) and Shimron Hetmyer (39).

The resurgence faltered when part-time off-spinner Root picked up his first ODI wicket since January 2018 with a return catch to remove Hetmyer and quickly made it two when he grabbed a leading edge off Windies captain Jason Holder.

Archer, after an expensive opening spell, cleaned up the tail-enders. He picked up his first wicket on a referral to the TV umpire when Pooran got a slight edge off his glove to England wicketkeeper Jos Buttler.

Archer trapped Sheldon Cottrell lbw on the next delivery and, after Oshane Thomas blocked the hat-trick ball, got his third wicket when he had Carlos Brathwaite (14) caught behind.

Wood (3-18) finished off the innings when he bowled Gabriel as the Windies lost 4-10.

“We lost wickets at crucial stages and I guess a few careless shots,” Holder said. “The toss was a bit crucial, [but] I think we lost the game in the middle overs. Our batters need to take a little bit more ownership in the middle.”

Top-ranked England now have three wins and a loss in the tournament and next play Afghanistan in Manchester. After a promising start with an emphatic win over Pakistan, the Windies have now lost two and had to share the points with South Africa in a washout here earlier this week. The Windies will next face Bangladesh on Monday.