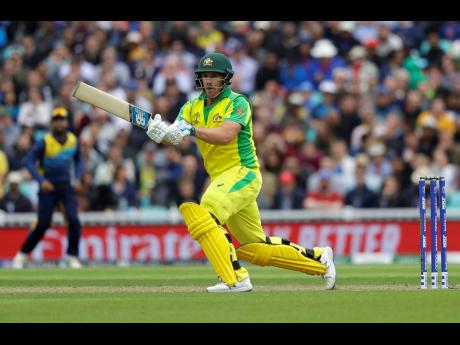 Defending champions Australia are on top of the ICC Cricket World Cup standings even though they aren’t firing on all cylinders.

The Australians had too much depth for Sri Lanka as they won by 87 runs at the Oval yesterday, their fourth victory in five matches, lifting them over New Zealand and England.

Despite not wanting to bat first on a fresh pitch under cloud cover, opener and captain Aaron Finch unleashed the century he’d signalled in previous matches, his 153 from 132 balls powering Australia to 334/7. Finch flowed with Steve Smith for a tournament-high partnership of 173, and they left Glenn Maxwell time to hit a 25-ball 46 not out.

But the Sri Lankans weren’t intimidated by the 335 target. They were gung-ho and attacked. Dimuth Karunaratne tried to inspire his side like Finch did Australia, but after he was out for a career-best 97 in the 33rd over, his team collapsed. From 186-2 to 247 all out in 45.5 overs, the last eight wickets fell for 61 runs.

The 11 days since their last match, after two washouts, didn’t help, but the batsmen are struggling. Sri Lanka were previously bowled out for 136 by New Zealand and 201 by Afghanistan. The team remains in the top half of the standings but not for long on this form. England are next up on Friday.

“We need to come up with a plan,” Karunaratne said, adding his middle-order batsmen also need to knuckle down.

The benefit of playing three matches while Sri Lanka was watching the rain was borne out. Australia were match tough and adapted to rough patches.

“When you’re playing really good cricket, it’s nice to be playing all the time,” Finch said. “You just get on a roll. You get into playing mode.

“We’re happy where we’re sitting but definitely time to sit back and assess where we can improve and what we can do over the next couple of weeks to give ourselves the best chance to be standing on the Lord’s balcony on the 14th of July (after the final).”