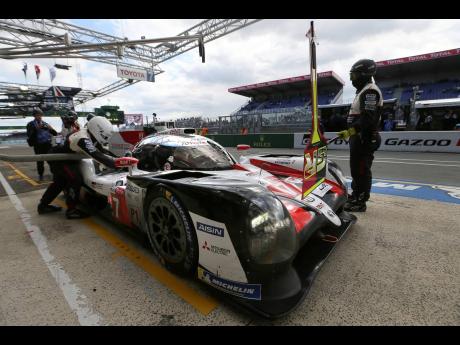 David Vincent
The Toyota TS050 Hybrid No7 of the Toyota Gazoo Racing Team driven by Mike Conway of Britain, Kamui Kobayashi of Japan, and José María Lopez of Argentina refuels in its stand during a stop during the 87th 24-hour Le Mans endurance race, in Le Mans, western France, yesterday.

NEVER mind the Reggae Girlz’s 5-0 loss to Italy at the FIFA Women’s World Cup on Friday, Total Jamaica’s entourage at the 87th 24 Hours of Le Mans was superproud to own the girls playing in the world’s most famous athletics colours, more so in the country where the Reggae Boyz had historically made their FIFA World Cup debut in 1998.

Ever wondered why Total Jamaica is so caught up with local motor racing? Well, its parent company, Total SA, headquartered in Paris, is a major sponsor of the 24 Hours of Le Mans, an annual automobile endurance event on steroids, lasting, yes, 24 hours, at the Circuit de la Sarthe in Le Mans, France.

Starting at 3 p.m. on Saturday afternoon (8 a.m. Jamaica time), the race roars on until 3 p.m. Sunday, but the event itself officially got under way on Friday with a nationally televised presentation of drivers, chauffeured in vintage cars from a pre-ceremony show to the Place des Jacobins, overlooked by the Cathedrale Saint Julien.

What’s the big deal about the 24 Hours of Le Mans? For starters, the crowd lining the streets, wanting to get into the presentation of drivers, rivalled that of those watching the Women’s World Cup. Le Mans is the world’s oldest active sports car race in endurance racing, held annually since 1923, known as the ‘Grand Prix of Endurance and Efficiency,’ representing one leg of the Triple Crown of Motorsport, the other events being the Indianapolis 500 and the Monaco Grand Prix.