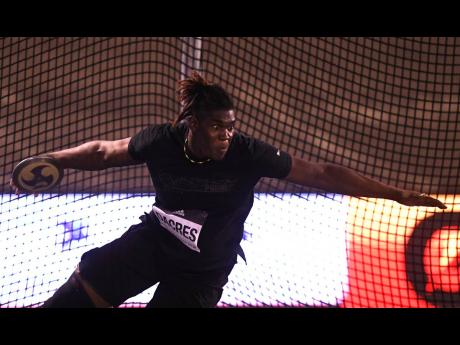 Jamaica’s Fedrick Dacres lorded over a top-class discus throw field at the IAAF Diamond League meet in Rabat, Morocco, yesterday. Dacres launched his third throw to a world-leading national record distance of 70.78m to beat prime rival Daniel Stahl of Sweden. The win avenged a loss Dacres had suffered to Stahl earlier in the season.

The 25-year-old Jamaican had lost to Stahl at the Stockholm stop on the Diamond League circuit and opened with throws taped at 67.09m and 68.71m. His big throw was originally adjudged to be a foul, after which he added a 69.50m fourth effort. That wouldn’t have been enough to win as the big Swede cranked out a 69.94m throw.

However, the final results revealed the world-leading measurement for Dacres and gave him his first throw over 70 metres. This followed a successful protest by Dacres.

It improved his previous national record of 69.67m and extended the world lead from Stahl’s mark of 70.56m in Doha last month.

The other Jamaican in action in Rabat was Olympic and World champion Omar McLeod, who placed fifth in the 110m hurdles.

Sergey Shubenkov, the Russian who preceded McLeod as World champion, won in 13.12 seconds over the Briton who succeeded the Jamaican as World Indoor champion, Andrew Pozzi.

In notable action elsewhere in the Rabat meet, Salwa Eid Nasser of Bahrain took an early lead in the 400m and rode it to a winning time of 50.13 seconds. By contrast, Nigeria’s 2014 Commonwealth double sprint champion, Blessing Okagbare, had to hurry to clip Marie-Josee Talou of the Ivory Coast, 11.05 to 11.09 seconds in the 100m, and Olympic runner-up Andre deGrasse of Canada edged Turkish World champion Tamil ‘Rocket’ Guliyev in the men’s 200m by 0.01.

The Canadian, who was second to the retired Usain Bolt at the 2016 Olympics, clocked 20.19 seconds.