McCoy upbeat in spite of injury 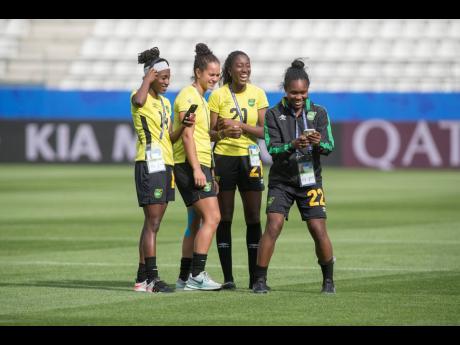 Injured days before the start of the FIFA Women’s World Cup and relegated to the sidelines, Jamaican striker Kayla McCoy is managing her disappointment and making the most of the situation.

The 22-year-old was expected to play a substantial role in coach Hue Menzies’ tactical plans in France as one of only two out-and-out strikers in the squad but suffered a knee injury during Jamaica’s final warm-up game against Scotland, which ruled her out of the tournament.

Still, the Houston Dash striker is happy to offer moral support to her teammates and gather as much from the World Cup experience as possible.

“I mean, it has definitely been tough,” McCoy told The Gleaner ahead of a rehabilitation session yesterday. “I have put a lot of work and effort to get to this point, so to not be able to see the fruits of what I put in has been rough. But it has been a good time, and it has been important for me to be with the team and to be able to stay with them during the tournament. Obviously, staying on the sidelines is not where I’d like to be, but I’d rather be here than to be home.”

“I have also seen the resilience of this team as we get back up and rise after some tough defeats, and it’s been pretty inspiring. I can’t wait to get back on the field with them,” McCoy said.

McCoy, who is still waiting to know the extent of the damage to her knee, said that the setback has pushed her to work even harder and return an even stronger player. She added that her Reggae Girlz teammates have really encouraged her and have done their best to make her feel like part of the team.

PART OF THE GAME

“It has definitely pushed me. I can’t sit and sulk about it; it’s part of the game. It happens, so you just have to get back up and get back to work and do everything to get better as quickly as you can. That’s what I have been doing to ensure that I’m doing as much rehab as I can do while I am here,” McCoy added.

McCoy’s replacement in the squad, Mireya Grey, has spoken publicly about their good relationship, and McCoy shared that she was happy that Grey was given the opportunity to rejoin the squad, even if it came at her own expense.

“I’m not going to lie, I was happy to hear that she was the one coming in to replace me. She is a fantastic player, and I think she deserves every bit to be here, and so the fact that what happened to be unfortunate for me has turned into an opportunity for her, I am grateful to be a part of her experience as well. She mentioned we are close; I haven’t known her very long, but the first day we met, we hit it off, and I have been excited to have her back here with us,” said McCoy.

McCoy has played three times for the Reggae Girlz.