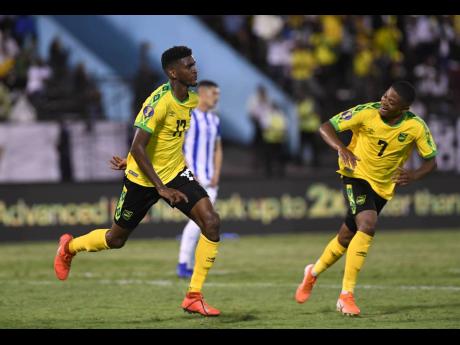 Ricardo Makyn
Jamaica's Damion Lowe (left) runs off in celebration with teammate Leon Bailey after netting the team's third goal in their 3-2 win over Honduras in their Group C clash in the Concacaf Gold Cup at the National Stadium tonight.

Jamaica's Reggae Boyz ensured their historic hosting of the Concacaf Gold Cup ended on a positive note with a 3-2 win over Honduras at the National Stadium tonight.

All the attention coming into the game may have been on Leon Bailey, making his debut tonight, however, Dever Orgill was the man of the moment, having scored both goals.

Orgill put the Jamaicans ahead in the 15th minute after Leon Bailey found Peter-Lee Vassell slipping into the box. After receiving the ball, Vassell attempted a shot on goal but Honduras goalkeeper Luis Lopez got a hand to it, and the loose ball was collected by Orgill, who, although standing in an offside position, was all alone to head into the empty net.

In the 41st minute, Orgill received a pass at the top of the box and weaved his way between the Honduras back line before seeing his shot deflect into the back of the net.

Honduras got themselves back into the game in the 54th minute, however, when a slip at the back by Shaun Francis allowed Honduras to pick up the ball in the box and Anthony Lozano made no mistake from close range.

But Jamaica restored the lead only two minutes later when Damion Lowe headed in from a corner kick. Jamaica remained on top for the remainder of the game, but things got nervy for them in stoppage time when substitute Roman Castillo was unmarked in the six yard box and placed a well timed header beyond Jamaica keeper Andre Blake. That was the last significant action of the game however, as the Jamaicans held on for the win and move to the top of Group C.