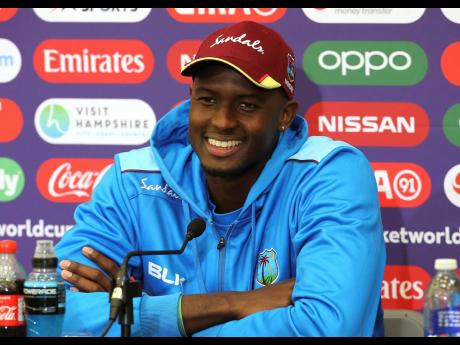 Despite having won just two of their last nine matches against Bangladesh, Windies skipper Jason Holder is still backing his troops to come out victorious when the two sides face off in a crucial ICC World Cup clash today.

The Windies and Bangladesh both have three points from their four games, with the regional side ahead due to a better net run rate.

In a Tri-Nation Series prior to the start of the World Cup, Bangladesh defeated the Windies in their three meetings, including a dominant win in the finals.

While Holder acknowledged that the Windies will be going into the game as underdogs, he said those statistics counted for nothing.

“If you want to put us in the underdog category, fair enough. We’ve played them quite a bit in the recent past, and they’ve got the better of us in recent past. Like I said, different stage, lots at stake for this game. We’re all up for it.

“I guess if you win seven over the last nine, as you said, probably, yes [they are favourites]. Yeah, it’s the game of cricket; we’ve all been seeing how this World Cup has panned out. There are quite a few close games, and there have been one or two upsets as well, too. Cricket is played on the day, and we’re looking to play some good cricket tomorrow (Monday),” Holder insisted.

Needing to win their remaining five matches to stand a good chance of qualifying for the next round, Holder said victory over Bangladesh would serve as a good momentum booster.

“I think the ball’s in our court; we’ve just got to be consistent. We’ve got to play some consistent cricket going into the back half of this tournament.

“It’s quite a good stage to pick up momentum as well, and we’re full of confidence that we can do it. We’ve just got to take it game by game. Tomorrow is a challenge against Bangladesh, and we just want to get over Bangladesh and move forward,” Holder said.