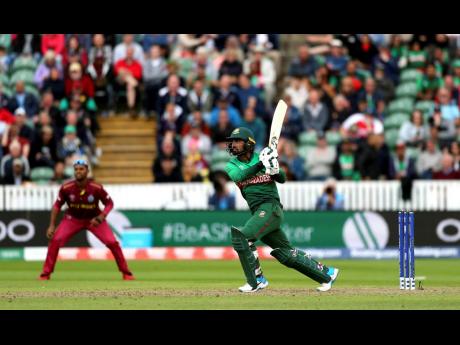 When the Windies surged to post 321-8, they knew every team making 300-plus batting first had won in this World Cup. Eight times out of eight.

But Bangladesh treated the fact like fluff on a shirt, flicking it off as they strolled to 322-3 to win with 51 balls to spare.

Shakib Al Hasan starred in the comeback with 124 not out, his second successive century in the tournament, and Liton Das added 94 not out in his World Cup debut. They combined for an unbeaten 189 in 22.3 overs, bashing short balls ruthlessly.

“No one felt that this was tough,” Shakib said of the mood between the innings. “Everyone was comfortable and was chilling. It gave a lot of confidence in the dressing room and belief that we could chase that.”

Bangladesh’s second precious win in five matches lifted them into the top half of the standings. The mission to make a first World Cup semi-final received a massive boost. Next up is Australia.

The deflated Windies, however, dropped to one win in five with a hard road ahead against New Zealand, India, Sri Lanka and Afghanistan to reach the semi-finals for the time in 23 years.

Shakib sliced apart a pedestrian Windies attack with pulls and cuts off the back foot, and some luck. He top-edged three times over the wicketkeeper and should have been out on 55, but keeper Shai Hope, running backward, and Shannon Gabriel, coming forward, didn’t communicate and both backed off as the ball fell between them.

Other shots by Shakib and Das landed near fielders who made little effort to go for them, the batsmen gradually stripping hope from the West Indies, who were reduced to long faces, heads down, and thousand-yard stares.

The result was no surprise. Bangladesh came in having beaten the Windies in seven of their last nine matches, including the last four, all from batting second.

O Thomas not out 6

Shakib Al Hasan not out 124

Liton Das not out 94