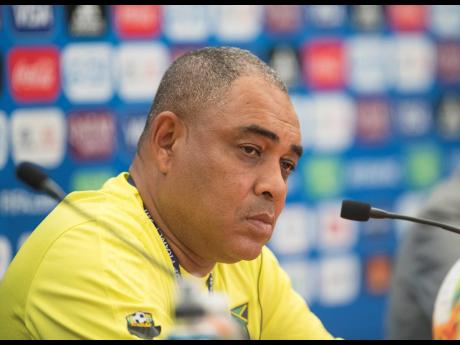 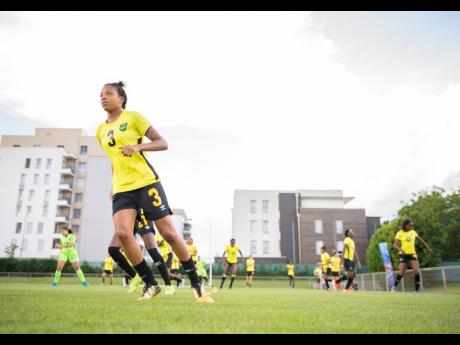 Gladstone Taylor
Jamaica women’s international Chanel Hudson-Marks goes through her paces, along with her teammates, during a training session at Stade Eugene Thenard in Grenoble, France, yesterday ahead of the Reggae Girlz’s Group C FIFA Women’s World Cup match against Australia today.
1
2

It has been a tough FIFA Women’s World Cup (FWWC) debut for Jamaica’s Reggae Girlz.

After two games and two losses, the numbers do not make for impressive reading.

However, in today’s Group C finale against Australia at the Stade des Alpes at 9 p.m. (2 p.m. Jamaica time), head coach Hue Menzies is looking to take this team beyond the history of its qualification, and he sees an opportunity for the Girlz to create a special moment in Jamaica’s women’s football.

Menzies, quite remarkably, is backing his team to pull off what would be one of the biggest shocks in world football.

The Jamaicans are still hunting their first point of the tournament after losses to Brazil (3-0) and Italy (5-0) in their two games so far and are one of five teams yet to score a goal in the competition. Additionally, only one team – hapless Thailand with 18 – has conceded more goals than the Jamaicans after two games.

Still, while acknowledging the historical importance of their FWWC qualification, Menzies underlined that a pat on the back and a ‘thanks for coming’ is not his idea of a successful campaign and insisted that the target for today’s match, as unlikely as it sounds, is a win.

“We have some pride in ourselves. I think we beat up ourselves more than people think because we know we should be doing better. We want to get some results out of this, that is why we are here,” Menzies told reporters yesterday during the team’s pre-match press conference at the Stade des Alpes.

“We want to qualify; that’s what we are here for. Obviously, it’s a mathematic deal that we have to get through, and some of the other groups, I haven’t really had a chance to check. We are going into this game thinking that we need to get a result. If we play the way we are capable of playing, we should be able to get a result here. I’m going in it to qualify, that’s why we are here,” Menzies insisted.

The top two teams in each of the six groups plus the four best third-place finishers will advance to the round-of-16 stage of the FWWC. Jamaica are currently rooted at the bottom of Group C without a point, with Italy on top with six and both Brazil and Australia on three points apiece. Brazil, however, have the edge with a +2 goal difference compared to Australia’s 0.

Now, to say that Jamaica have a mathematical chance of advancing to the next round would not put the situation into perspective. The permutations are so unlikely that it’s more akin to Harvard-level advanced calculus.

Jamaica, who have only managed five shots on target so far, would need to beat the world No. 6-ranked Australia – who themselves need a result to guarantee their spot in the next round – by at least eight clear goals. Believe it or not, that’s the most straightforward route.

They could also ‘simply’ get a decent win over Australia and pray for a huge favour from Italy, who would have to beat Brazil (+2) by enough goals to reverse their goal difference advantage over the Jamaicans (-8). If either of those weren’t ridiculous enough, Jamaica would then also have to depend on other results going their way to ensure that they finish as one of the top four third-place finishers.

Maybe it’s simply bravado, or maybe Menzies knows better than to totally write off the team after seeing enough from the Girlz, who have fought their way back from adversity after adversity to get to where they are today.

There is one glaring problem, though.

Despite their efforts, the team’s offense has barely bothered their defensive rivals here.

“We have been struggling a little bit in the final third. We have been working on that right now. Today’s (yesterday’s) session was a lot of final-third stuff, so hopefully, we can redeem ourselves. I thought we had some really good chances in the game against Italy that we squandered, so that is something that we are aware of,” Menzies admitted.

Australia’s Sam Kerr, last year’s ESPY recipient for Best International Women’s Soccer Player and Menzies’ vote for the best player in the world, has so far managed just one goal in her two matches to date and will likely be Jamaica’s biggest threat today.

Whatever happens today, another chapter in Jamaica’s FWWC story will be written. The hope, the dream is that the epilogue provides better reading.