Brazil not settling for draw 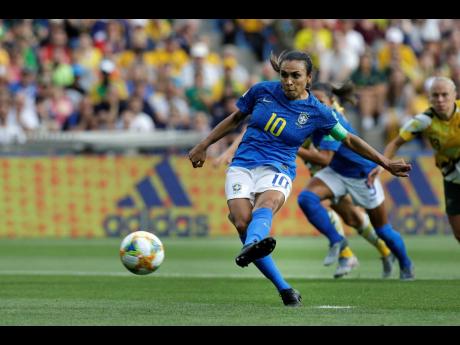 A draw is all it would take for Brazil to advance in the FIFA Women’s World Cup.

Brazilian star Marta has zero desire to play 90 minutes, aiming only to draw with Italy in the Group C match today at Stade du Hainaut in Valenciennes.

“To play for a draw? I don’t like to enter a match thinking about that,” she said.

Marta missed Brazil’s opening match against Jamaica because of a left-thigh injury, but the forward returned for a 3-2 loss to Australia. Marta scored a record 16th career tournament goal against Australia and became the first player to score in five Women’s World Cups.

But Marta wants Selecao to advance to the round of 16, and coach Vadão agreed that a draw with Italy wasn’t part of the plan.

“We always need to play; 90 minutes is an eternity to think about a draw right away,” he said. “But we also need to be smart, obviously, knowing that a draw is in the tournament regulations.”

Brazil said yesterday that midfielder Formiga will not play, and Marta said overcoming the loss of her long-time teammate will be a challenge against Italy.

“Formiga is an irreplaceable player. She is just different, from another planet, and the numbers won’t hide it,” Marta said. “But on the other hand, there comes an opportunity for younger players who can and want to show up their skills.”

Marta, meanwhile, could be limited in playing time. She said she was healthy and wanted to help Brazil.

“We won’t do anything crazy,” said Vadão. “We will talk at half-time to understand how she is feeling.”

Italy are 2-0 and already through to the round of 16 after victories over Australia and Jamaica. Cristiana Girelli scored a hat-trick and Aurora Galli had two goals in the 5-0 rout of Jamaica that advanced Italy.

The Italians need just one point against Brazil to win the group, but that could be secondary to freshening legs through roster rotations.