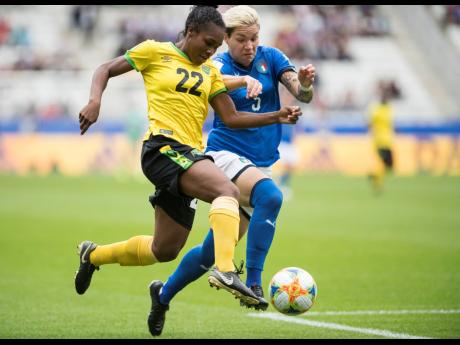 Gladstone Taylor
Jamaica’s Mireya Grey (left) is tackled by Elena Linari of Italy as she dribbles to goal during the teams’ second Group C match in the FIFA Women’s World Cup at Stade Auguste-Delaune in Reims, France, on Friday, June 14. The Reggae Girlz lost 5-0.

Sports for West Indian and Jamaican fans this past week has not been good. By the end of the second week of June, we were supposed to be enjoying sports and congratulating our stars on standout performances, even if victory was not possible.

Our lady cricketers are fast becoming the beating sticks of arch-rivals England, and our much-talked-about ‘new attitude’ West Indian cricketers in the ICC World Cup continue to show that the ‘thinking aspect’ of cricket is sadly missing. I do believe that our lady cricketers in England are up against a vastly superior group of England ladies, so defeat after defeat can be expected, but our men were supposed to be doing better than expected in this World Cup.

In looking retrospectively at our batting and bowling in the completed matches so far, we are not in any way inferior to the talent on display by tournament favourites India, England or Australia. We just seem completely unable to assess critical situations in matches and bat accordingly. The idea of ‘batting our way’ regardless of the circumstances or conditions continues to make us experts at grabbing defeat from the very jaws of victory.

Our captain, Jason Holder, appears to have the answer to what is needed in these crucial points of the game but just cannot transform that knowledge into action on the field of play.

In football, our ladies have now realised that the FIFA Women’s World Cup is completely different from the qualifying matches that propelled them to the historic finals. Our defence that was crucial in some of our victories has been shown to be slow and lumbering when facing world-class forwards who run directly at you, only to turn on a dime and leave our once stalwart defenders looking aghast at shots from all angles peppering our world-class keeper.

As our coach now admits, this experience will only help us to improve if corporate Jamaica steps up to the plate with the necessary financial support. This support may become increasingly critical to the future of women’s football if the treatment meted out to our Reggae Girlz ambassador, Cedella Marley, is not sorted out quickly and satisfactorily. The bald and barefaced confession by the president of the Jamaica Football Federation that loyalists are rewarded with trips, possibly resulting in priorities becoming skewed and apologies becoming the norm when “oops” is no longer accepted.

The fall and defeat of our champion sprinter and former RJRGLEANER Sports Foundation National Sportsman of the Year, Omar McLeod, in last weekend’s IAAF Diamond League in Rabat, Morocco, only served to make the end of the week welcome.

There were, however, some good spots. Reigning RJRGLEANER Sports Foundation National Sportsman of the Year, Fedrick Dacres, threw the discus for a new Jamaican record and world-leading distance of 70.78m at the same Rabat meet, the first-ever throw over 70m on African soil. He thus fulfilled a promise made to his Jamaican fans that he was going to throw the discus over 70m this year. A throw for the ages!

Our soon-to-be national hero and world champion sprinter, Usain Bolt, was made captain of a World XI football team in a UNICEF charity match against an England XI. The England team was coached by legendary coach Harry Redknapp and included Sir Mo Farah and David Seaman, as well as many other notables. Usain was the captain of the World XI, which was coached by journalist Piers Morgan and included Didier Drogba and Eric Cantona among the notables. The game ended 2-2 with our hero and captain scoring one against David Seaman in goal. The World XI eventually won 3-1 on penalties. The match garnered £7 million for charity.

Alia Atkinson’s bronze medal in swimming all made up what served to make last weekend not a total waste.