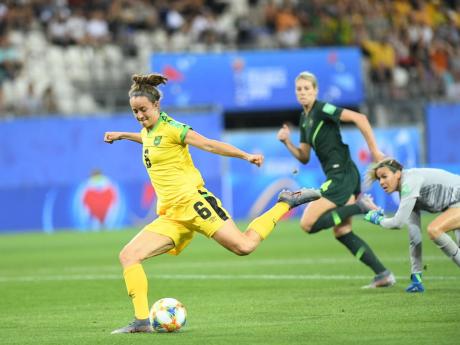 It was a moment akin to finding a sparkling oasis amid the sweltering heat of a desert as Jamaicans watched as Havana Solaun rounded the Australian keeper to neatly slip the ball into the net.

She scored Jamaica’s first and only goal in a FIFA Women’s World Cup. As the ball rolled across the line, Stade des Alpes, in Grenoble, France came to life to celebrate the feat despite the crushing defeat.

The game would come to end 4-1 as Australia sealed the Reggae Girlz’s exit from the tournament with player of the match, Sam Kerr, scoring all four goals for the Matildas.

The first half was not an impressive showing for the Jamaican defence, with the combination of Ellie Carpenter and Emily Gielnik making life extremely difficult for the backline as they marauded down the right wing with efficient consistency.

It was this link up that created the first two goals, with Gielnik’s service into the box finding the head of Sam Kerr who scored two impressive headers for her first two goals.

She would later return for her hat-trick as she latched on to a loose ball in the six-yard box to make it three and then finished the rout when she capitalised on a goalkeeping error by Jamaica’s Nicole McClure, to slip the ball into an empty net.

Khadija Shaw showed her tenacity once again when she won the ball in midfield before dribbling straight at the heart of the Australia defence.

A deft pass into the box saw Solaun scoring what would be Jamaica’s consolation goal four minutes into the second half.

The result sees Jamaica ending the tournament without a point while Australia finish on six points as the group’s runners-up.

They advance from the group and will face Norway at Nice in the Round of 16 on Saturday.