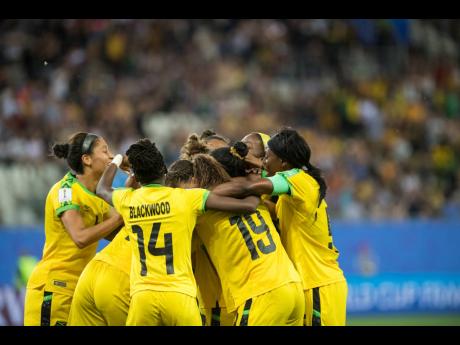 Born in Hong Kong to a Cuban father and a Jamaican mother and currently based in Norway, it’s no wonder the most cosmopolitan of Jamaican players would create history on the world stage.

Second-half substitute Havana Solaun produced the highlight of Jamaica’s first appearance at the FIFA Women’s World Cup, becoming only the third Jamaican to score at this level in the senior ranks as the Reggae Girlz went down 4-1 to Australia at the Stade des Alpes yesterday.

Head coach Hue Menzies, who praised his team’s efforts ­throughout the tournament, believes that their performance proves that with the right preparation and support, they can compete at the highest level of women’s football.

With FIFA president Gianni Infantino among the over 17,000 spectators inside the venue, Jamaica produced their best performance of the competition but had no answer for Australian dynamo Sam Kerr, who raised her tally to five goals in three games, helping herself to all four of the Aussies’ strikes.

The result meant that Australia joined group winners Italy, who lost 1 - 0 to Brazil on six points, as the two automatic qualifiers, with the South Americans joining them in the round of 16 as a one of four best-placed third-placed teams. All three teams ended with six points, with Jamaica finishing without a point.

“It’s such a good feeling to come here and know that your team gave the effort. We didn’t execute the way we wanted to, but we can’t stop saying how resilient this group is. They kept going after it. It didn’t matter what the score was, they kept playing and believing in themselves,” Menzies said after the contest.

The Jamaicans got off to a bright start with a slick exchange between Mireya Grey and Cheyna Matthews right after the kick-off, leading to a cross that was easily gathered by Australian goalkeeper Lydia Williams.

Both teams settled into a rhythm, with the Jamaicans looking very much like they belonged, matching their world number 6 ranked opponents stride-for stride before the first blow was struck.

Menzies has repeatedly mentioned his admiration for Kerr, ­noting that he would pay anything to watch her play. Well the Jamaican defenders must have felt the same way, watching on as the striker rose high to meet a cross from the left flank, to head home in the 11th minute.

In the 26th minute, Kerr again got head to ball, but this time goalkeeper Nicole McClure, who replaced Sydney Schneider in the line-up, managed to tip her effort over the crossbar.

Cheyna Matthews almost responded for the Jamaicans in the 30th minute, after breaking away down the left channel. She, however, lost her footing at the top of the box, after cutting inside her defender.

The Girlz continued to press the Matildas with striker Khadija Shaw, who started from a midfield position, sending her 39th minute free kick high over the crossbar after a foul on Toriana Patterson about 30 yards from the goal. The big striker returned to head just wide from a corner from Grey two minutes later.

The addition of Patterson to the Jamaican midfield brought some much needed steel and enterprise. In partnership with Chantelle Swaby, the pair did well to extinguish the fires in the middle of the park, and were busy throughout as the team’s driving force. On this game alone, one could say that Jamaica has perhaps found its best central midfield pair.

The same cannot be said for the left side of defence, however, with Deneisha Blackwood struggling all game and Tiffany Cameron falling prey more often than not, to the marauding runs of Aussie full back Ellie Carpenter and winger Emily Gielnik. In fact, it was from that side that the next goal would be crafted.

Just as the Jamaicans were hitting their stride, Australia again took advantage of some truly poor defending, with Kerr roaming free like a Gazelle on the Australian outback, arriving on the Jamaicans’ six-yard box to head her team to a 2-0 half-time advantage.

Jamaica, however, returned determined to make a mark and on 49 minutes, Solaun carved her name in Jamaican sporting history.

She has Shaw to thank, as it was the striker turned midfielder on the day, who stole the ball off an Australian player before driving at the Aussies and playing a perfectly weighted through ball into Solaun’s path. The Norway-based midfielder did the rest, rounding Williams before slotting the ball into the back of the net to spark wild and passionate celebrations in Grenoble and no doubt throughout the diaspora.

She joins Robbie Earle and Theodore Whitmore as the only players to score for Jamaica at a senior World Cup tournament.

“It’s bittersweet, it’s not the result we wanted but it’s always an honour to score for our country,” Solaun said. “I think that goes without saying but I think at the same time, we are a really young team and I am excited by what the future holds for us.”

The goal sparked a mini camp in the Australians’ half, with Matthews forcing a save from Williams shortly afterwards and a 40-yard run from Shaw ending up with the striker shooting wide a couple minutes later.

Shaw almost secured an equaliser in the 64th minute after a delightful pass from Solaun left her with space in front of goal, but with the angle getting tighter with each step, Shaw shot just wide of the left upright. She again shot wide after working some room for herself with some fancy footwork down the right channel in the 65th minute during a strong spell by the Jamaicans.

But again, Australia scored when the Jamaicans looked most comfortable, this time in the 69th minute when a cross from Hayley Raso bounced off Campbell in the six-yard box and landed at the feet of the worst person possible, Kerr, who made no mistake.

A huge blunder by McClure, who miskicked a back-pass, allowed Kerr to add a fourth in the 83rd minute.

Qualification to Australia but the applause at the final whistle went to the Jamaicans, who ensured they didn’t end their fairytale journey empty-handed.