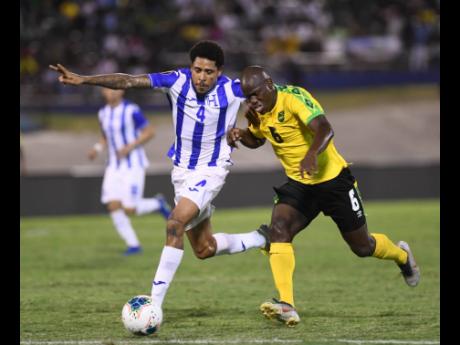 Dever Orgill went 13 games before finding the net for his country, but he broke his duck on Monday night by netting not once, but twice as Jamaica’s Reggae Boyz came away 3-2 winners over Honduras in their Concacaf Gold Cup Group C clash. The game, the second of a double-header at the National Stadium, marked the first time Jamaica, or any Caribbean nation, for that matter, had ever played host to the tournament.

But the former Titchfield High player said he knew that with hard work, the goals would eventually come. However, getting the goals in front of home fans at the ‘Office’ in an important Gold Cup match made it even more satisfying for him.

Orgill, who plays club football for Ankaragücü in the Turkish Süper Lig, put the Reggae Boyz ahead in the 15th minute before doubling their advantage in first-half stoppage time. Honduras pulled a goal back through Alexander Lozano, but Damion Lowe re-established the Jamaicans’ two-goal lead.

Honduras got another from Rubilio Castillo in added, time but the Jamaicans went on to secure the win.

Orgill saw the importance of his goals on the night. “It was two very important goals, and I am really proud and glad, not only for my goals, but the victory to start the Gold Cup,” he said.

The speedy striker, who put in a full shift in the encounter on Monday, last played for the national team in the Copa America Centenario in 2016, and he is relishing this recall to the Reggae Boyz team and aims to build on his performance against the Hondurans.

“It feels really good (to be back in team),” he said. “The last time I played was in the Copa America. I was unlucky with some injuries, because I was called but could not make it, so I am happy to be back in the team, and I am going to try my best to do everything that is important to try to get some goals and help lift the side,” he said.

Coach Theodore ‘Tappa’ Whitmore lauded the forward for his contribution on the night.

“Orgill is on the field to do what he does,” Whitmore shared. “He was excellent tonight, he worked hard, he got two goals, and I am very pleased,” he said.

Jamaica, who top the group on goal ­difference, will face El Salvador in their second game in Houston, Texas, on Friday.