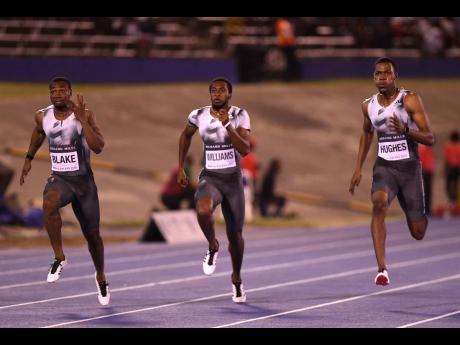 Believe it or not, the most watched event at this weekend’s JAAA National Senior Athletics Championships will be the men’s 100m sprint. That doesn’t sound logical at first but it’s true. Although Fedrick Dacres, Janeek Brown, Aisha Praught-Leer and Danniel Thomas-Dodd have set world class national records in the last few weeks, fans have the 100m front and centre in their thoughts.

When the question machine-guns my way about the current state of Jamaica’s track and field, I present the impressive credentials of Dacres and his training partner Traves Smikle. I presented the credentials of the emerging high-speed hurdler Brown, of distance darling Praught-Leer and throws dynamo Thomas-Dodd, a squadron of high-flying long jumpers including Tajay Gayle, and a deep hurdles group led by reigning World and Olympic Champion Omar McLeod and a powerful female sprint and 400m group anchored by Shelly-Ann Fraser Pryce and Elaine Thompson.

Without fail, my defence is slapped away. “No, I don’t mean that” I hear. “What about the men’s 100?”, comes the query in supermarkets, eateries, gas stations and parking lots. In an online lament, a writer worried about the ‘cricketisation’ of Jamaican track and field.

In a way, it’s understandable. Ever since Asafa Powell brought the world record home on June 15, 2005, Jamaica has been on top in the 100. Usain Bolt took over as world record holder in 2008 and won almost everything in sight at the Olympics and the World Championships from that year to 2016 and when he faltered and false started at the 2011 IAAF World Championships, Yohan Blake sprinted in to save the day.

That kind of dominance will make you fall in love.

The 2019 Jamaican top 10 includes six who have broken 10 seconds in the past. Among this group is Tyquendo Tracey, winner of the Athletics World Cup last year and 2017 World semi-finalist Julian Forte.

Add 2013 World bronze medallist Nesta Carter and Jamaica have the makings of a 4x100 team that could be podium bound in October when the relay is contested in Doha.

Asafa is battling injuries in his quest to continue what he started in 2005. Whatever happens, his 2006 Commonwealth gold, twin World bronze medals, his world records, his three trips to the Olympic final and his unprecedented total of 97 sub-10s have booked his place in global track and field history.

If this is the bandwidth sprinters now operate in, 9.85 might win a medal in Doha. Having run under 10 in each of the four years since his return from horrific injuries, such a time might not be out of reach for the 2011 World Champion.

His best since his return is 9.90 seconds.

People keep asking me and I understand why. It’s the Tall Man’s fault for being so good that he gave us a gilt-edged guarantee of sprinter’s gold. I keep replying, “Dacres, Brown, Fraser-Pryce, Gayle, McLeod, Praught-Leer, Thomas-Dodd, Thompson and Williams”, but people just keep asking.

Hubert Lawrence has made notes at track side since 1980