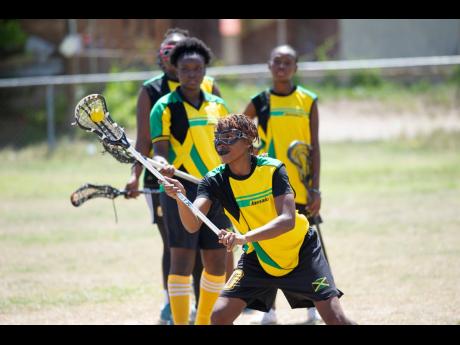 Ricardo Makyn
Alicia Thaxter (front) engages in training drills with her teammates at the Wolmer’s Preparatory School playing field on Saturday, June 8. Jamaica’s Under-19 Lacrosse team is preparing for the Federation of International Lacrosse Women’s Under-19 Championships in Ontario, Canada from August 1-10.

With the Federation of International Lacrosse Women’s Under-19 Championships a month away, the Jamaica Lacrosse Association (JamLax) has increased its calls for financial support.

A GoFundMe page created by the association has raised only US$5,750 (roughly J$750,000) to date of a revised target of US$67,600 (just under J$8.9 million), and there has yet to be any favourable responses from the relevant governmental agencies or corporate Jamaica.

The day-to-day expenses of Jamaica’s historic first ever women’s national team is being financed by the personal funds of members of the association, along with parents of the players. With the competition set to run from August 1 to 10 in Ontario, Canada, there is precious little time left.

JamLax president Calbert Hutchinson says that while they have had to resort to raising funds by hosting events in the United States via their overseas fundraising committee, they have done little more than cover expenses related to the team’s uniform and equipment so far.

“We have not been able to secure any significant funding from any organisation within Jamaica,” Hutchinson told The Gleaner. “We have our overseas fundraising committee hosting special events at local restaurants to raise money on our behalf. We have also been reaching out to individuals, requesting sponsorship for individual players on the team.”

Hutchinson further said that the financial difficulties being faced by the association have in no way dampened the resolve of his administration, or the players, in realising the dream of participating in the championships. The team has intensified its preparations on the field and there is a buoyant spirit in the camp. He believes lacrosse will be the sport of the future, despite its niche nature in Jamaica.

“Where there is a will, there is a way,” he said. “My team and I took on the challenge knowing the obstacles that would come along with it.

“We see the challenges that the Reggae Girlz have faced and continue to face along their journey to the World Cup as a traditional sport, so as a newly introduced sport in Jamaica, we weren’t expecting any special treatment.

“We are hoping that the relevant agencies, and Jamaica at large, will see that the non-traditional sports are the sports of the future, and our youth are gravitating to them.”

Persons wishing to contribute to the Jamaica under-19 women’s team can visit https://www.gofundme.com/send-the-jamaican-u19-women039s-team-to-worlds.