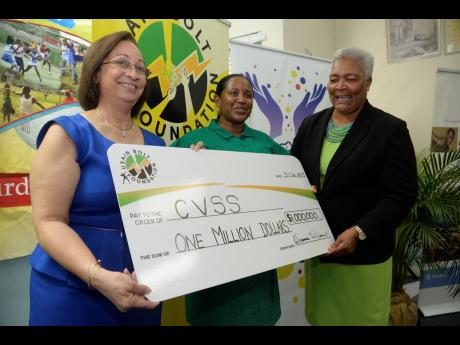 Elon Parkinson, public relations and communications manager of Digicel Jamaica, said the Council of Voluntary Social Services (CVSS) Summer Games, scheduled for July 6 at The UWI Mona Bowl, has the potential to expand into a major national sporting event.

Parkinson said organisers should look at transforming the event into a national summer competition ­similar to the Summer Olympic Games.

“CVSS Summer Games presents a tremendous opportunity to unite communities around sports,” he said at the launch at the Jamaica Olympic Association headquarters on Wednesday. “We are already doing that. But to the degree where one can have a summer games in place which can compare with the Olympics, another summer games, this tells me we are on to something.

“It will be an opportunity for people to indulge in more sports. People will have the time because schools are out and most people take vacation at that time, so we want to centre our focus on it, and my thinking is, why not expand it? Why not make this a truly national event? It can remain inclusive by keeping the disabled community, we can still make it participatory by inviting everybody, but also, now we want to make it a part of the national sporting calendar.

“So just like how the National Trials is a big buzz, it’s the same way we should create a big buzz around these amateur games. We need to look at where we are and see how we can stage the summer games. We can make it a really big deal – have qualifiers with people from the regions or the counties. So it would be good to consider it on a broader national scale and get the Ministry of Sport more deeply involved in the staging and see how we can make it bigger than before,” he said.

The games will be held over two weekends: Saturday, June 22, and July 6. The event will see ­participants from approximately 20 social and voluntary ­service agencies and communities ­competing for ­honours in football, cheerleading, netball, basketball, track and field, and other events.

The six-a-side football ­competition will be held this Saturday at the National Water Commission field. However, all other events take place on July 6 at the UWI Mona Bowl.

The games will have participants from casses one to four in track and field, with the top three finishers in each event to receive medals. The winning teams will get ­trophies at the end of the event.