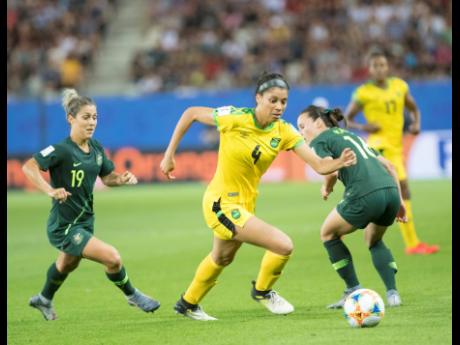 Women’s football’s showpiece event, the FIFA Women’s World Cup 2019, is in full swing and has, thanks to the Reggae Girlz, captivated the nation’s attention and exploded in popularity. We now see what’s possible when we invest in the talents of our people and, specifically, the typically underfunded women’s game.

Our Reggae Girlz didn’t register a win in their world cup debut, but this was always an arduous objective, given the strength and experience of highly ranked Brazil, Italy and Australia. Anyone disappointed with the Reggae Girlz’s showing in France would largely be unaware of the comparative numbers.

All things considered, the proverbial cup, for the Reggae Girlz, is more than half-full. In playing among the best in the world, we have gained increased brand visibility, invaluable team experience, and global exposure for our Girlz, who are now better prepared for our upcoming qualification bids for the Olympics and the Pan American Games.

Additionally, Brand Jamaica would have benefited from the massive global TV audience that playing the world’s biggest teams attracted. Jamaica’s opening match against Brazil averaged 19.7 million viewers in Brazil alone! That puts Brazil in second for the highest domestic TV audience in women’s football history, bettered only by the United States (US) versus Japan final in 2015. Italy’s domestic TV audience for the match against Jamaica was more than 3 million viewers. This goes a far way in making our girls globally recognisable brands with heightened earning potential in the respective domestic leagues across Europe.

Most impressive of all are the TV ratings in the United Kingdom, with the Women’s World Cup outstripping the ICC World Cup viewership so far. BBC saw some 4.6 million viewers watching England’s opening game, which is a new record for a women’s football match. England’s matches in the men’s ICC World Cup have been averaging only about 550,000 viewers. Considering that the ICC World Cup is being hosted by England and is typically the biggest sport on their summer calendar, these metrics illustrate how women’s football continues to soar.

For the Jamaica Football Federation, women’s football has afforded them a financial payout of more than US$1 million (just under J$130 million), with US$480,000 (J$62 million) for qualifying and another US$750,000 (J$97 million) for participation.

But while women’s football continues to grow at a faster rate, with some countries, like the US, having more popular women’s teams than their male counterparts, the total prize payout still sees a significant disparity. In the US, the women’s game has seen increasingly higher revenues than their male counterparts’, but their earnings are significantly less and the subject of a current lawsuit. The men’s senior team has even pledged its support to the women’s team in a publicly released statement in 2018.

As the sport continues to grow, FIFA will be tasked with closing the gap in terms of earnings for the women’s game. For now, the women continue to soar, and so have our Reggae Girlz.

Tanya Lee is a Caribbean sports marketing practitioner and can be reached at tanyatlee@gmail.com.