Warner too much for Bangladesh 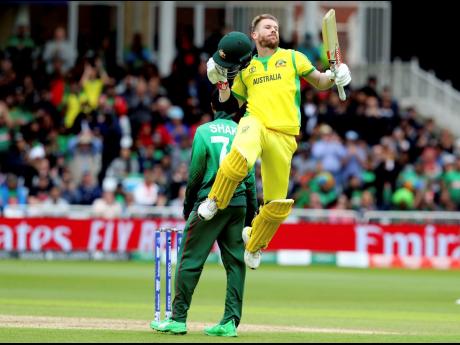 AP
Australia’s David Warner leaps into the air to celebrate scoring a century during their ICC World Cup match against Bangladesh at Trent Bridge in Nottingham, England, yesterday.

David Warner became the tournament’s leading run scorer by hitting 166 in two century partnerships that underlined a 381-5 total, the second-highest in World Cups for Australia.

Then Mitchell Starc grabbed sole leadership among the wicket takers with his 14th and 15th as Bangladesh’s chase slowly unravelled and ended tamely on 333-8.

Mushfiqur Rahim finished a maiden World Cup century on 102 not out, but his team’s hopes faded halfway through their chase when Tamim Iqbal (62) was back in the pavilion with Shakib Al Hasan (41).

Australia, the defending champions back on top of the standings, go to Lord’s on Tuesday to face top-ranked England in good shape. Since losing to India, Australia have won three straight group matches and have posted four consecutive 300-plus scores.

For Bangladesh, defeat means they have to win their last three matches against Afghanistan, mighty India, and Pakistan to make their first World Cup semi-finals. Not impossible, but the top four of Australia, New Zealand, England and India look increasingly set.