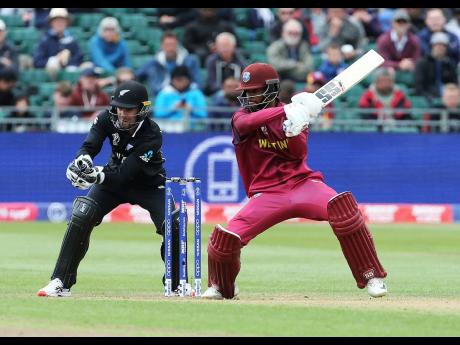 Mark Kerton
Windies’ Shai Hope (right) in batting action during a warm-up match against New Zealand ahead of the ICC World Cup at the Bristol County Ground, Bristol, England, on Tuesday, May 28.

New Zealand fast bowler Matt Henry says the warm-up defeat to the Windies had not dented the side’s confidence but warned teammates that they would be against “a dangerous” side when the two teams meet here tomorrow.

The Windies piled up a mammoth 421 to beat the Black Caps by 91 runs in their second warm-up of the ICC World Cup in Bristol but have since won just one in five outings in the tournament.

In contrast, New Zealand are unbeaten in the World Cup, with four wins from five matches, and lie second in the standings on nine points.

“It was just a warm-up game, so I’m not too worried, but every game is important in a World Cup,” Henry said ahead of the contest at Old Trafford.

“Especially with the format the way it is, it will be a good challenge. It’s a new venue. We go to Manchester, and it’s going to be another great contest.

“The West Indies are a very dangerous side so we’ll give them that respect but we’re looking forward to the challenge.

“In every ground, we will be faced with different challenges, so it’s making sure we adapt to every surface we play on. Every game has been different, and we’ve had to attack it a little differently.”

New Zealand are just one of two unbeaten teams in the World Cup, along with India, and are virtually assured of booking a top four spot.

They opened their campaign with a dominant 10-wicket win over Sri Lanka in Cardiff and have hardly put a foot wrong since. Confirmation of their class came when they chased down a tricky 242 in their last game against South Africa on Wednesday to win by four wickets with three balls left.

Slumping at 137 for five at one stage, the Black Caps were rescued by captain Kane Williamson, who struck a magnificent unbeaten 106, and all-rounder Colin de Grandhomme, who lashed a quick-fire 60 off 47 balls.

“You’re sitting there with the opportunity to win a World Cup game, so it’s pretty exciting. To be able to sit there and watch someone like Kane construct an innings like he did, and Colin as well, it was impressive to watch,” Henry said of Wednesday’s run chase.

“It was a calm dressing room. We knew what we had to do; we just had to take it deep and keep the run rate under control.”

Tomorrow’s fixture will be a do-or-die one for the Windies, who need to win in order to keep alive their already slim hopes of reaching the semi-finals.