Capturemyship only rival for My Elle Belle 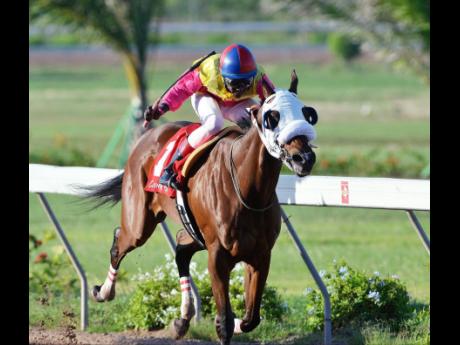 THIS afternoon’s overnight allowance, at seven and a half furlongs, for horses who have never won at the level, should play into MY ELLE BELLE’s running style, her only real threat being CAPTUREMYSHIP.

However, CAPTUREMYSHIP will have to prove his stunning performance off an eight-month lay-up was no flash in the pan – a length and a half third, at odds of 99-1 – in the June 1 Ahwhofah Trophy behind ZEPHYR and LOTTERY TICKET.

Last time out, May 11, MY ELLE BELLE ­finished second but was disqualified and placed fifth in a bruising seven-furlong contest won by UNCLE FRANK, who ran alongside the rail, avoiding multiple bumping matches, which started at the top of the lane, with SARATOGA SIGHT hindering LOTTERY TICKET.

MY ELLE BELLE got into the mélée a furlong out, bumping LOTTERY TICKET, and was deservedly disqualified. However, the United States-bred filly was never more than four lengths off the pace from the half-mile to the winning post, improving from sixth at the top of the straight to third a furlong out.

Running an even race throughout, MY ELLE BELLE had behind her four of 11 rivals she will again face, going longer, UNCLE VINNIE, STORM VALLEY, EL PROFESOR and MADAM SECRETARY. It was hardly two weeks later that SARATOGA SIGHT and third-past-the-post BRUCE WAYNE returned to complete the exacta in the Ren Gonsalves Memorial at 10 furlongs.

LOTTERY TICKET, who was eased, also franked the form with a strong second-place finish in the Ahwhofah Trophy, too late to catch 21-1 stunner ZEPHYR at six furlongs, relegating CAPTUREMYSHIP to third while howling 1-2 favourite, LEGALITY, finished fourth.

CAPTUREMYSHIP, who appeared to be headed to, at least, open allowance when taking orders from Richard Azan, lost form last summer and was grabbed by Paul Charlton out of a $1 million claiming event. That didn’t go too well, but a change of barns, same owner, to Ralph Porter, resulted in a stunning third-place run after only being able to show early speed at his previous stable.

MY ELLE BELLE’s form lines have been muddied with three six and a half furlong races events, which were far too sharp for her. Throw those out the window and note her performances against SARATOGA SIGHT, ORPHEUS, SUPERLUMINAL, and RUN THATCHER RUN at distances from seven to eight and a half furlongs.

Considering it took eight months for CAPTUREMYSHIP to run his best race in more than a year, that can’t be any comfort, especially going a furlong and a half longer with cheap speed for company.