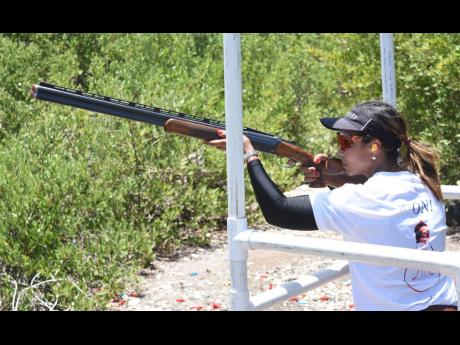 Contributed
Wendy McMaster, winner of the Ladies section of the Toyota Cup Sporting Clays Championship at the Jamaica Skeet Club in Portmore, St Catherine on Sunday.

B Class shooter Zachary Harris held his nerve in a tense shoot-off against defending champion Craig Simpson to be crowned HOA (highest overall winner) of the Toyota Cup Sporting Clays at the Jamaica Skeet Club in Portmore last Sunday.

The fourth staging of the Toyota Cup saw Harris and Simpson ending with scores of 83 each out of a possible 100 on a hot and windy day at the range that challenged all the shooters to maintain shooting accuracy. This led to an eight bird shoot-off between the A Class shooter Simpson and Harris. Simpson mounted the station on the back of a 2019 Toyota Hilux and picked off three of eight birds and took the runner-up spot. Harris had to get at least four of the eight birds to win. He got five after picking off the last two birds.

Simpson said that he read the second bird wrong but was happy for Harris, who was winning the Toyota Cup for the first time.

“It was a challenging course, but with a challenge in front of you, you just have to try and overcome it,” Harris said. “That’s exactly what I did but with my training and determination, I stayed focused throughout the day, I did my best.

“The targets were challenging, and the wind also played a big factor with how the targets flies. That was the more challenging part, but they did set an excellent course. I enjoyed shooting at the course, and I am happy to come out number one.”

McMaster was pleased with her performance.

“The course was really challenging, and on top of that, the wind did not make it any easier,” she said. “The breeze was just crazy. The targets were just going all over the place, and it was not a steady pattern of targets presentation. You just had to try and focus on the targets and bury your head in the ground and execute.”