I told you so! 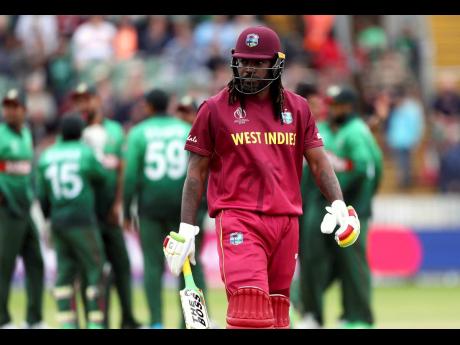 I don’t want to say “I told you so.” Then again, maybe I do! My column entry on June 1 told you all “Don’t get carried away with Windies win.”

At the time, we had just run over Pakistan in our first ICC World Cup game, and hopes were high in the region that the Windies would do something special at the tournament. I did not think so. Despite the creditable 2-2 series draw against England earlier this year, and even after that lopsided first win against Pakistan, I did not feel we should get overly optimistic. I felt that this Windies team would eventually self-implode. Friends and colleagues felt I was not giving the Windies enough credit. I did not want to sound like a prophet of doom, but some of us have to analyse with our head and not our heart.

Four games after that first win, the Windies have lost three, with one rained out. It is not far-fetched to say that had it not been for rain, we would have lost four. We are hovering in the bottom half of the table, which makes today’s game against New Zealand a virtual must-win.

Our batting has been out of sorts. The bowling has looked like a one-trick pony. If we can’t blast batsmen out with bouncers, we seem unaware of what else to do.

The team selection has left a lot to be desired. We keep chopping and changing every game. We continue to play Andre Russell, who is hobbling badly and, seemingly, spends more time off the field than on it. As one man said to me, “Russell can’t bat 10 overs, he can’t bowl 10 overs, and he can’t field 10 overs.”

We have been brought back down to earth in no uncertain manner. This round-robin format, where all 10 teams play against all teams, was always likely to see the cream rise to the top. After nine games, the contenders would always be separated from the pretenders. At the moment, Australia, New Zealand, England, and India are clearly looking to be the teams most likely to make the semis. That should surprise no one.

Interestingly enough, the four teams that may finish seven to 10 all have former Windies cricketers as part of the coaching set up: Floyd Reifer with the Windies, Phil Simmons with Afghanistan, Otis Gibson with South Africa, and Courtney Walsh with Bangladesh, are all finding the going rough. Not only Windies cricketers, but apparently “nutten nah gwaan” for Windies coaches either!

All hope is not yet lost, however. There could still be a set of results that could get the Windies into the semi-finals, but I would not bet on it. We have changed the president of Cricket West Indies, we have changed the coach, we have changed the selectors. The one thing that has not changed is our performance on the field. The Windies has been a poor One -Day International team in recent years and this World Cup is a mere reflection of that.