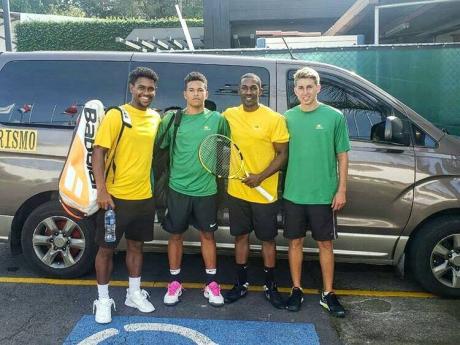 The Jamaicans defeated Honduras 2-1 in the final of their Group Three encounter. It is the first time that the country is being promoted to Group Two since 2008.

Pagon told The Gleaner from the team’s base in Costa Rica yesterday that he was overwhelmed with the team’s achievements.

“I am feeling very excited about the win,” Pagon said. “The entire week was a big battle for us because all of our games that we won, we won them 2-1, so it shows how well we have been playing in this tournament,

“This means a lot to us because it means that we are now promoted to Group Two, and we have been trying to do this for over 10 years because the last time we have done was in 2008.”

He added that this a major accomplishment for the national team and credit must be given to the Tennis Jamaica president John Azar, whom he said played a vital role in the team’s achievement at the championships.

The Jamaicans got off to a rocky start as Jacob Bicknell had to come from behind to defeat Alejandro Obando 1-6, 6-4, 6-3. Randy Phillips then wrapped up victory for the Jamaicans when he defeated Jaime Bendeck 6-4, 6-1. The Jamaican team of Pagon and Dimitri Bird then fell 6-4, 1-6, 4-6 to the Honduras pair of Keny Turios and Bagriel Zuniga.