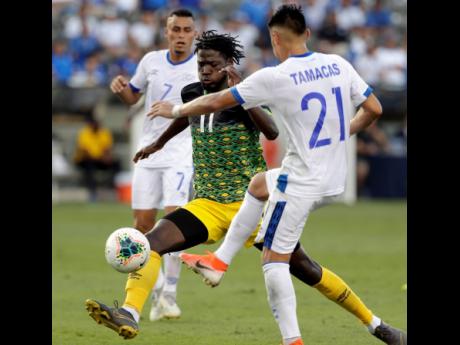 Carlos de los Cobos certainly felt the better of the two coaches as El Salvador were able to grind out a goalless draw against Jamaica in the second set of matches in Group C of the Concacaf Gold Cup yesterday at the BBVA Compass Stadium in Houston, Texas.

It was a mute affair between the two teams as both sides lacked the initiative to get the go-ahead goal throughout the encounter. It would take 75 minutes before either side was able to register a single shot on target as the teams seemed intent on trading possession in a slow-paced midfield battle.

A like-for-like substitution of Shamar Nicholson and Darren Mattocks for Dever Orgill and Brian Brown in the 66th minute injected some much-needed pace into the affair, with Nicholson coming close to giving the Jamaicans the lead when his shot inside the box was charged down by the robust Salvadoran defence. Former Jamaica College stand-out Junior Flemmings also came close to scoring but saw his effort parried away by the strong gloves of Henry Hernandez between the sticks for El Salvador.

Jamaica’s last solid effort came late in the second half when Shaun Francis let loose a speculative effort from nearly 40 yards out that forced Hernandez to parry the ball over the bar.

El Salvador offered little threat offensively going forward, with the Jamaican defence being able to smother any real chance they were able to create. Their best chance came from a freekick in the 88th minute but was comfortably saved by Andre Blake, the Jamaican custodian.

Noteworthy was Kemar Lawrence’s performance during the match. While at his usual level of play, the robust defender seemed as though he would rather be anywhere but on the field yesterday, with his body language clearly screaming frustration throughout the match.

The results mean that both teams now lead the group with four points apiece and retain the same position that they had coming into the fixture, with Jamaica in first with a superior goal tally.

Jamaica will go up against Curaçao next in the final group fixtures, while El Salvador faces Honduras. Both matches are set to kick off on Tuesday as a double header at the Banc of California Stadium at 7 p.m. and 9:30 p.m., respectively.