No sold out games in FWWC round of 16 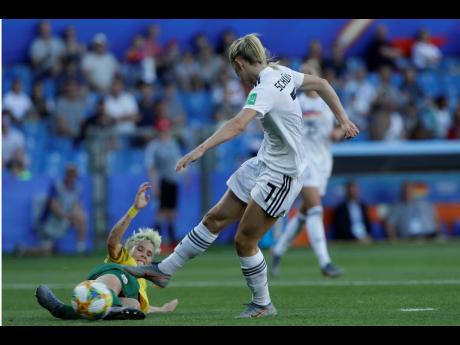 Claude Paris
Germany’s Lea Schueller (right) attempts a shot at goal as South Africa’s Janine Van Wyk slides in for a block during their FIFA Women’s World Cup Group B match at the Stade de la Mosson in Montpellier, France on Monday. Germany is one of the teams contesting the Round of 16.

Data from FIFA show that none of the round of 16 games at the Women’s World Cup in France has sold out.

In details provided to The Associated Press, FIFA says that around 900,000 tickets have been sold overall to the “general public and fans around the world".

Two weeks ago, FIFA initially announced that it had sold one million tickets before withdrawing the claim after acknowledging that the total included team staff, media, and VIPs at games.

FIFA says that only five games in the knockout stage are sold out: two quarterfinals, both semi-finals, and the final.

Even though thousands of seats have remained empty at FIFA Women’s World Cup stadiums, FIFA only started tweeting on Thursday to promote tickets sales for the first time during the tournament — after two weeks.