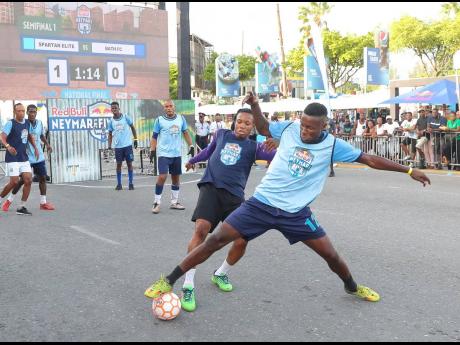 Spartan Elite, after three rounds of play, became champions of the Red Bull Neymar Jr’s Five-A-Side Football competition and head to Brazil to represent Jamaica in the world championship.

The event, launched in Kingston on April 9, saw over 1,000 players from across the island competing over six weeks in intense qualifiers leading up to the June 16 final, where eight teams faced off for the coveted title and the chance to play against Neymar Jr and his team at the world final in July in Brazil at the Instituto Projeto Neymar Jr in Praia Grande, Brazil.

Malhotra FC, Pump House, Spartan Elite, Big Yaad, Medley Mixers, Lionel Strikers, Road to Brazil, and Bath FC played in two groups in a round robin to determine the semi-finalists who would advance.

No strangers to the game after entering the qualifiers at three different locations, Spartan Elite started the day strong, winning all their matches to advance to the semi-final, where they would face Bath FC.

Medley Mixers, who hail from the same community as Spartan Elite in St Elizabeth, and in other circumstances would be their teammates, advanced to the semi-finals after not conceding any goals in Group B. In a shocking goal in the last few minutes of an electric semi-final, the team lost to Pump House, based in Clarendon.

In an intense final, which ended 0-0, the teams went into sudden death with a 1v1 player stand-off. After showing some quick shifting, Akeem Gibbons from Spartan Elite scored the winning goal from half court, securing victory for the team. Team captain Rohan Thompson commented on the team’s strategy, saying, “Our team knew we needed to keep possession of the ball as much as possible and use the backboard to our advantage, and that’s what we did to secure the victory.”

To raise the bar in this unique experience, telecommunications giant FLOW partnered with Red Bull, offering six players the opportunity of a lifetime. An MVP was selected from each of the qualifiers and given the chance to play in a trial match for Red Stripe Premier League Champions Portmore United to pursue their dreams as professional players.

“As sponsors, we are extremely happy to have partnered with Red Bull in this innovative competition, which captured the hearts of many across Jamaica. Major congratulations are in order for Spartan Elite, who displayed sheer grit and talent to take the title, and also to our six Flow MVPs who have a great opportunity ahead of them to impress the leadership of Portmore United. We look forward to cheering on the team as they head to Brazil in July,” Stephen Miller, FLOW sponsorship manager, said.