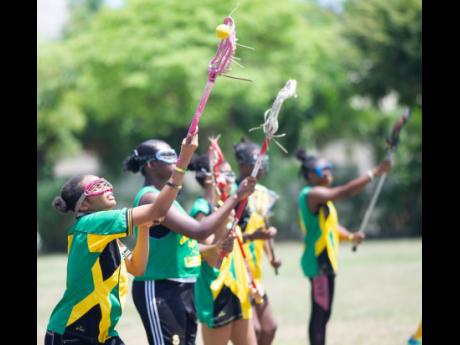 It is a gusty Saturday afternoon at the Wolmer’s Preparatory School playing field. Jessica Sylvester and her teammates are carrying out their warm-down routine in the sweltering Kingston heat, wrapping up another lengthy training session. For the girls of the Jamaica Under-19 lacrosse team, this has been a staple of their weekends for the past seven months, and with the world championships set to begin on August 1, the intensity of the preparations has increased dramatically.

Sylvester, like many of her teammates, professes a love for the relatively new sport to the island. While she got exposure to competition through the local Maroon Cup hosted by the Jamaica Lacrosse Association, she recounts her first encounter three years ago as by chance.

“My friend, Sarah, heard about a camp at St Georges and suggested we try it out,” she said. “I was a 15 year-old fourth former. We both went and I stuck with it ever since. It is a really fun sport, and that was the year it really took off in Jamaica, where they instituted programmes in high school, and it came to Campion, so I was able to start playing at school, and I continued.”

“We have become a real family. There are two months left until the championships, so we are just putting it all in and working really hard so we can make Jamaica proud.”

The 18 year-old Campion College sixth-former relishes the opportunity to represent Jamaica on the world stage and has been working hard at realising that dream. While the girls are confident of their prospects in the competition, they have not been spared the overarching reality of the financial difficulties facing the association. That speck of doubt is a lingering example of the difficulties women often face in sports.

“It’s really hard, actually because even in the high-school league, the boys always tend to get more attention than the girls,” she said. “Girls are always to the side. It would be amazing for the focus to finally be on us because we work just as hard as the boys, but they get that much more focus and attention. As a woman, it is very frustrating to work just as hard but not get as much funding and exposure, and the opportunity to have that would be amazing.”

Sylvester said that her teammates were still optimistic, despite the challenges facing their campaign. The association has had to resort to creative means of generating the necessary funds for their pioneering team, and she expressed her gratitude for the work of the administrators. It has underscored in her mind the importance of every session with her extended ‘family’.

“Our spirit is really high,” she said. “My teammates are a really great set of girls, very talented with a tremendous amount of potential. We have been working very hard to be able to represent Jamaica on the world stage.

This will be the first time a women’s national team will represent Jamaica in lacrosse, and it is the first team made up mainly of native players, players who learned the sport in Jamaica and train in Jamaica. This would be a phenomenal experience.”