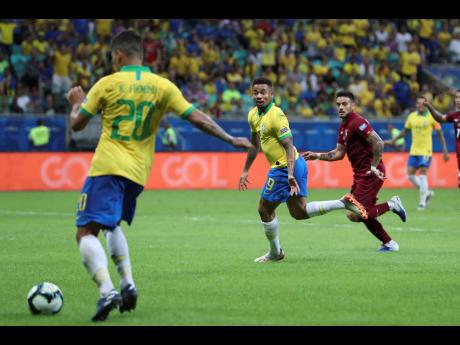 Ricardo Mazalan
Brazil’s Roberto Firmino (left) passes the ball to teammate Gabriel Jesus (centre) to score a goal that was disallowed by the referee during a Copa América Group A match against Venezuela at the Arena Fonte Nova in Salvador, Brazil, on Tuesday.

Under pressure after two lacklustre performances by Brazil in the Copa América at home, coach Tite is expected to make changes to his squad ahead of its final group game today.

Brazil face Peru this afternoon in Sao Paulo needing at least a draw to guarantee a place in the next round. Few doubt Brazil will make it through as the Selecao can advance even with a loss, but only a convincing performance will satisfy the demanding Brazilian fans and relieve some of the pressure on Tite.

The coach did not say who will start today but hinted that he will not keep the same team from the first two games.

“We have several athletes with different characteristics,” Tite said yesterday. “Each one can help in different ways depending on the match.”

The coach’s main changes are expected in the attack, which has been the team’s primary weakness.

David Neres, Richarlison, and Roberto Firmino, the trio that started the first two matches, are yet to score. In the 3-0 opening win against Bolivia a week ago, Brazil had two goals from Philippe Coutinho and one from substitute Everton. The second match was 0-0 against Venezuela on Tuesday.

“We need to improve our precision in attack, we acknowledge that,” Tite said. “We know that we need to be able to translate our superiority into goals.”

Brazil entered the tournament without Neymar because of an ankle injury, and none of the other forwards have been able to make up for his absence. Neymar was dropped from the squad before the tournament but showed up at the team’s hotel yesterday to visit his teammates and support the team.

Tite, who on Thursday completed three years as Brazil coach, said after the team’s FIFA World Cup elimination last year, he regretted taking too long to make changes to the squad, and that this time, he would not make the same mistake.

Brazil were jeered in both Copa América matches, and many of the boos were aimed at Tite when he substituted defensive midfielder Casemiro with another defensive midfielder, Fernandinho, against Venezuela despite the team’s inability to create scoring chances.

The fans wanted him to use Everton, who played well coming off the bench in both games and is the player most likely to earn a starting spot against Peru. The quick forward helped open up the opponents’ defence, allowing Brazil to improve and create more scoring opportunities.

The other possible player to get a chance is Gabriel Jesus, who has also come off the bench twice. The Manchester City forward wasn’t as effective as Everton but did help improve the attack. He found the net in the second half against Venezuela, but the goal was disallowed after video review.