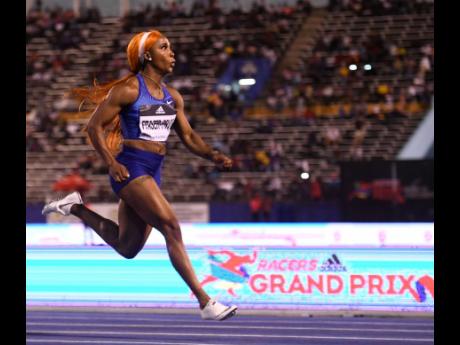 Although she had to settle for second place, Shelly-Ann Fraser-Pryce was in a joyous mood after the final of the women’s 100m at the Supreme Ventures/Jamaica Athletics Administrative Association (JAAA) National Senior Championships on Friday night at the National Stadium.

This as she believes that her accomplishment can provide inspiration for young boys and girls who face challenges in life.

However, despite missing out on the national title this time around, Fraser-Pryce was beaming with joy as she highlighted the sacrifice she had to endure to get back to running really fast times.

Fraser-Pryce’s athletic career was put on hold for the birth of her son, Zyon Pryce, and after two seasons, she worked her way back to running 10.73 seconds, .03 slower than her personal best time, which was done in 2012, the year when she retained her Olympic 100 metres title.

“I am really pleased. Coming back from having a baby, I am doing for some people the impossible. But nothing is impossible with God, and I hope that I can leave this as inspiration for the young women and men who are coming up to understand that it doesn’t matter what your setback is as long as you come back and you keep fighting and you endure until the end,” said Fraser-Pryce, who had a season best time of 10.98 seconds.

“Because it is not about the opinion of others, it is about what you believe. I am happy. I couldn’t have asked for anything else,” she told The Sunday Gleaner.

Fraser-Pryce used her signature pocket-rocket start to separate herself from the pack in the first 60 metres of the race. But her MVP club-mate Thompson, who has had her own problems with injuries over the last two years, closed the gap and was awarded the win.

“I don’t think I executed the last 30 metres as well, but there is still more to come in terms of races, and I will try to cement that before the World Championships,” Fraser-Pryce said.

The IAAF World Championships will take place in Doha, Qatar, from September 28 to October 6.

When asked if thoughts of running under 10.70 seconds have started to swirl in her mind, this is how she responded: “It is a work in progress, and my times are getting better, so I am looking forward to what is to come,” she said.