Blake making his way back – Boldon 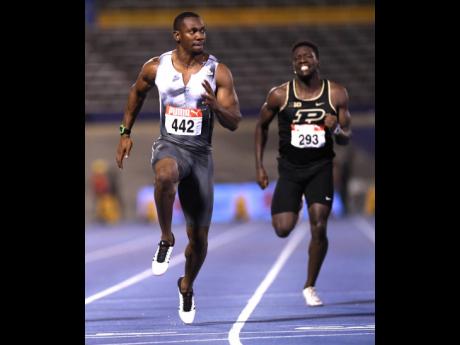 Ricardo Makyn
Yohan Blake (left) winning ahead of Waseem Willliams in the semis of the 100m at the Supreme Ventures/JAAA National Senior Championships, held a the National Stadium on Friday. Blake returned to win the final in 9.96 seconds.

Yohan Blake’s controlled performance in the final of the 100 metres at the Supreme Ventures/Jamaica Athletics Administartive Association (JAAA) National Senior Championships has made former world 200m champion Ato Boldon believe that the Jamaican is making his way back.

Boldon says that Blake’s win could boost a return to the world’s elite.

The 29-year-old sprinter measured his effort to win in 9.96 seconds, clear of 2018 Jamaican champion Tyquendo Tracey at 10.00 seconds.

“It’s good to see him back because I know the men have been taking a pounding, I’ve seen it in Facebook, I’ve seen it online, I’ve seen it all over, people saying the men are done, they’re finished, Blake is done, everything,” Boldon noted. “So that had to feel good to not only break 10 (seconds), but to get the national championship.”

Back in the fast lane

After watching a win that logged the Jamaican’s 38th run under the 10-second barrier, Boldon theorised that Blake could soon be back in the fast lane.

“So much of sport is above the neck,” he said, alluding to the power of a positive mind for athletes. “I feel like that is the kind of performance that, hopefully, can catapult him back into that world top four, five.”

Serious injuries stopped the Racers Track Club standard bearer in his tracks after glory years in 2011 when he became the youngest man to win the World 100 metres title, and in 2012, when he chased the now retired Usain Bolt home in both the 100m and 200m. In those seasons, he clocked personal best times of 9.69 and 19.26 seconds.

Since his return to competitive fitness, Blake has placed fourth in both the 2016 Olympics and the 2017 World Championships and third last year at the Commonwealth Games. He has now broken 10 seconds in four successive seasons.