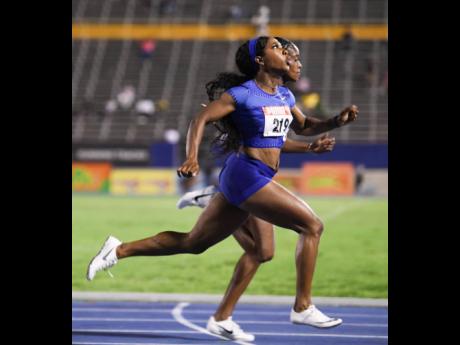 Elaine Thompson (background) edges Shelly-Ann Fraser-Pryce to the line in the women’s 100m final at the Supreme Ventures/JAAA National Senior Championships at the National Stadium on Friday night. Both athletes were clocked at 10.73 seconds.

Elaine Thompson and Shelly-Ann Fraser Pryce are so evenly matched no one is sure who will win when next they race.

That includes 1997 World 200 metres champion Ato Boldon, who has seen a lifetime of big sprint races.

Speaking at the National Stadium just after the women’s 100 metres final won by Thompson over Fraser-Pryce, he gave the slightest of edges to the winner over the woman he describes as the best 100 metre sprinter ever.

“I give a little bit more credit, I think, to Elaine because I can look at Elaine, know that that Achilles is still bothering her.

“She can’t push out of the blocks like she used to, so her forces are a little bit more vertical than horizontal, and she’s still running, I mean, they’re right at their personal bests,” he added.

Both ladies share the national record of 10.70 seconds. They are the only athletes ever to run faster in Kingston. Their personal bests were set inside the National Stadium at the Olympic Trials of 2012 and 2016, respectively, and Thompson did 10.71 seconds on June 23, 2017, as the big performance at the National Championships.

On Friday, the difference between them was merely 0.003 seconds.

Regarding the 2008 and 2012 Olympic champion, Boldon complimented, “Shelly-Ann is coming back from maternity and she’s 34 years old next year, so what can you say?”

Given those circumstances, he told his young charge, “You have nothing to lose, nothing to fear.”

Boldon, whose mother is a Jamaican, has such high regard for Fraser-Pryce and Thompson that he sees them as role models for Briana.

“I can only hope that one day, Briana has done half of what those two have done,” he said.