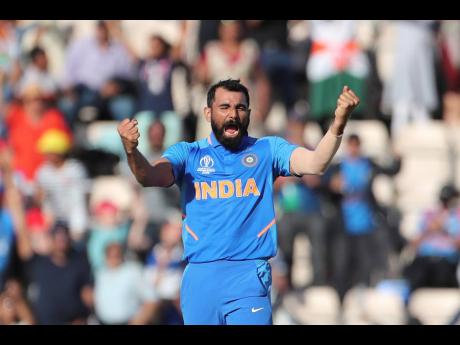 India survived a mighty scare from winless Afghanistan to win a thrilling Cricket World Cup contest in the last over by 11 runs yesterday.Unbeaten India were made to sweat the entire distance by the winless Afghans. Their incredible effort in a compelling, low-scoring match at the Rose Bowl almost earned them a first win over a still-stunned India.

Just four days after conceding 397 runs to England, Afghanistan restricted India to 224-8 and made a good fist of the chase until the last over.Afghanistan needed 16 to win from the last six balls with three wickets in hand.

Mohammad Nabi hit a boundary off the first delivery by fast bowler Mohammed Shami. Nabi refused a single off the second delivery to keep the strike. On the third delivery, he was caught at long on to end a nerveless 55-ball 52-run knock, more than his previous five innings combined.

But the drama wasn’t over.Shami’s yorker took out Aftab Alam’s leg stump, then his next yorker bowled Mujeeb Ur Rahman to end the match, and Shami became the second India bowler to take a World Cup hat-trick and the 10th overall.“How good you come back and finish your over is what’s important. That’s what Shami did,” teammate Kedar Jadhav said. “After getting hit for the first ball, he got a wicket and kept on picking those wickets. That’s when character comes into play.”

Afghanistan’s innings didn’t get early momentum as Shami got rid of Hazratullah Zazai for 10.But it was propelled by partnerships of 44 between Rahmat Shah and skipper Gulbadin Naib (27), and 42 between Shah and Hashmatullah Shahidi (21).Man-of-the-match Jasprit Bumrah (2-39) got rid of Shah and Shahidi in the 29th over, starting his second spell with a double-wicket maiden that turned the pressure back on Afghanistan.

Hardik Pandya put in a serious shift for 2-51 as India used only five bowlers. Surprisingly, its much celebrated wrist spinners Kuldeep Yadav (0-39) and Yuzvendra Chahal (2-36) paled beside the Afghanistan spinners.

Bumrah’s spell proved to be the turning point. India struck at regular intervals thereafter and never let the chase settle down. Afghanistan did well to take the match to the last over, making India worry to the end and keep its fans on edge for the entire day.