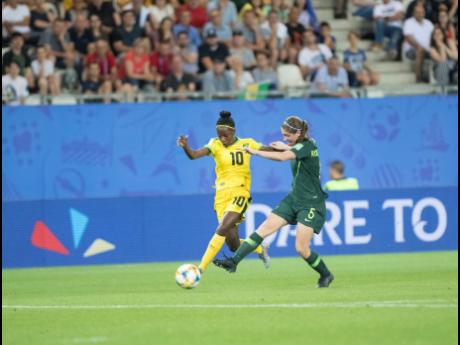 Gladstone Taylor
Jamaica’s Jody Brown (left) shakes off the challenge of Australia’s Karly Roestbakken during their final Group B game of the FIFA Women’s World Cup at Stade des Alpes in Grenoble, France, on Tuesday, June 18.

I remember vividly in the immediate moments after Jamaica’s senior Reggae Boyz qualified for the 1998 FIFA World Cup finals in France. In the midst of the post-qualification euphoria a friend calmly said to me that we should emphatically enjoy the immediate experience because we might never live to see Jamaica qualify for the World Cup again. In those fleeting moments, those words never seemed important.

Indeed, the feeling at the time was that Jamaica would qualify for every World Cup from then on. Suffice to say over 20 years on and five failed World Cup qualifying cycles later, the Reggae Boyz are yet to return to the grand showpiece event.

The memories of the Reggae Girlz’s historic trek to and from the FIFA Women’s World Cup are still fresh in our minds. Dominating the sentiments and the rhetoric is that we are still proud of the Jamaican team, which was the youngest at the tournament, with an average age of 23 years and 7 months, meaning that these girls will give a better account of themselves the next time around. Implicit in those pronouncements, however, is a dangerous assumption that these girls, and indeed Jamaica, will be at the World Cup the next time around.

It has long been my studied opinion that it is much more difficult for the Reggae Girlz to qualify for the World Cup than it is for the Reggae Boyz to qualify for the men’s equivalent. From where we are at the moment, it is a much more achievable task for the men’s team to tussle even with perennial powerhouses United States (US) and Mexico, but even more so with the likes of Costa Rica, Honduras, Panama and El Salvador, for the three and a half spots available for the World Cup.

The challenge is totally different for the Girlz, due, for the most part to the presence in this region of the three-time and reigning world champions, and No. 1 -ranked team, USA, as well as the perennial top 5-ranked Canadians. Despite missing out this time around, Mexico, another regional powerhouse, with much superior numbers and resources at their disposal, as well as the fast-emerging Costa Rica are all higher-ranked and indeed better teams than the Reggae Girlz.

It’s a near given that the USA and Canada will maintain their clear dominance in the women’s game in the region.

It also stands to reason that the likes in Mexico and Costa Rica will be pulling out all the stops to regain the glory that the Reggae Girlz effectively stole from them by displacing them at the summer showcase in France.

The ball is absolutely round, and the cliché in football that anything can happen is actually true, but let us not get smitten by the emotions of the moment. With adequate and effective preparation, they should make strides as a team, but let us not for one moment assume that it’s a given or that it will be easy for the Girlz to qualify for the World Cup again.

Of course, everything humanly possible should be put in place to give the Girlz the best shot at getting back on the big stage, but in sport, nothing is guaranteed, and the truth be told, repeat qualification is against the significant odds.

Instead of getting ahead of ourselves and starting to look too much to the next time, let’s bask in the glory of now and continue to enjoy and cherish these precious moments as provided for us by our history-making Reggae Girlz.