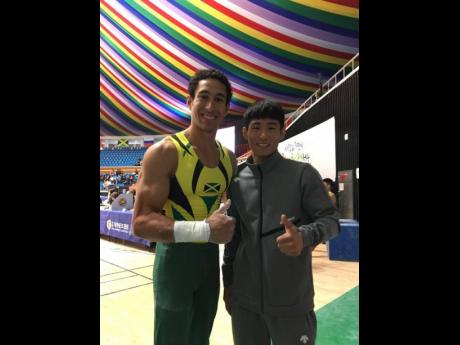 Jamaica’s Caleb Faulk finished seventh in the high bar final in the Korea Cup, an artistic and rhythmic gymnastics event held last Tuesday and Wednesday at the Halla Gymnasium in Jeju South Korea.

Faulk said the aim of his participation was to prepare for the upcoming Pan American Games in Lima, Peru.

“I went out and competed at the Korea Cup with some new routines and to prepare for the Pan American Games,” Faulk said. “[I made] A few mistakes but I hope I represented the federation and Jamaica respectably. Thank you for allowing me to experience this competition!

“I feel truly honoured and blessed to be able to experience a competition of this calibre, and represented Jamaica respectably amongst a highly competitive field,” he added.

“The exposure was needed for Caleb,” she said. “He was very strategic in his choice of skills to include in his routine as he prepares to compete at his best at the Senior World Championships in October of this year which is a qualifier for the 2020 Olympics. Based on is performance, he is definitely heading in the right direction as he fine tunes his routine for Worlds.”

Faulk was the only male representative from the Americas region.