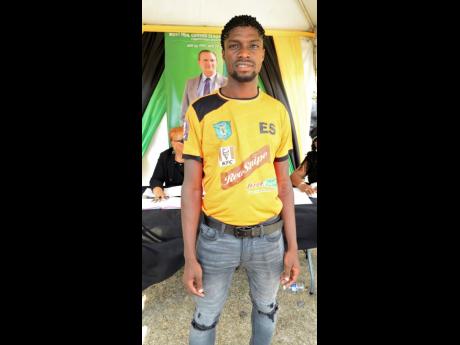 The late former Prime Minister Edward Seaga inspired a great many people throughout his lifetime. Some got a front-row seat as he went about helping to lay the foundations of nationhood in post-Independence Jamaica over his more than four decades as a lawmaker. Others admired him from afar through television and radio sets.

Tivoli Gardens Football Club (TGFC) star striker Colorado Murray, who was among thousands who turned out to bid farewell to Seaga at the Cathedral of the Most Holy Trinity in Kingston on Sunday, shared with The Gleaner some of his encounters with the late statesman, who had a deep passion for sports.

Murray credited aspects of his professional development directly to Seaga, who founded TGFC and served as its president up until his passing on May 28.

“He always said, ‘Come on, Colorado!’ He used to also say, ‘I am going to tie a string on the door, and you are going to hit that target,’ the striker shared as he told of how Seaga helped him sharpen his marksmanship .

Murray, the leading goalscorer for the 2018-2019 Red Stripe Premier League season, said that Seaga always ensured that the players had whatever was needed for comfort.

The footballer said that he was fortunate and grateful to have shared in many joyous moments with Seaga.

“Every time we talked, it was always jovial. He always puts out his best to make the club get everything it needs. In one season, each player could get up to four football boots,” he said. “We will miss him a lot. He used to say, ‘Team, I need these three points. I don’t want any money if you win, just the trophy. You can take the money’.”

The striker shared that Seaga had a keen eye on the ball at club games, even at times when it seemed that his attention had been diverted elsewhere.

“He used to watch our games from the stands, and at times, I think he wasn’t watching because his posture made him seem like he was looking elsewhere. The next day, he would say, ‘Colorado, you did this and that wrong’,” Murray said. “He was a great man!”