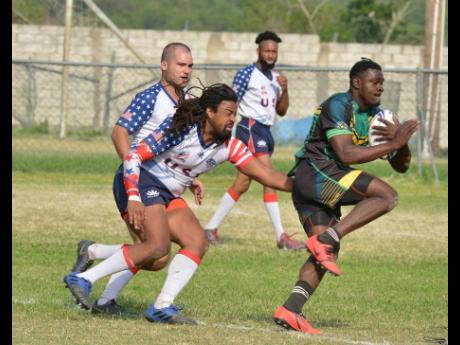 Kenyon Hemans
Roland Grey (right) of the Jamaica Reggae Warriors is tackled by Sean Hunt of the USA Hawks during a rugby league test match at the UWI Mona Bowl on Saturday.

Spectators at the anticipated match between the Jamaica Reggae Warriors and the USA Hawks on Saturday at the UWI Mona Bowl were treated to a historic feat as the Jamaican team recorded their first ever victory against the Americans on home soil and their second overall in eight match-ups. However, while the team came away 26-24 winners, it was what happened after the game that garnered many smiles.

As the match ended, head coach Romeo Monteith, explained that the team came together in a close huddle and chanted “One, two, three, Short Boss!” in the memory of their recently departed teammate, Leon Thomas.

Thomas passed away on June 4 after experiencing what he had described as a pain in his side. After a biopsy, it was discovered that he had a tumour in his kidney and despite treatment, he succumbed to the illness.

As a member of the Jamaica rugby league team at the time of his passing, Monteith explained that Leon was a well-loved figure among the team, and that his passing was a difficult time for them.

“It had a huge effect on us,” Monteith explained. “Leon was in camp with us in February, but he had to stop when he fell ill. We were really emotionally down and a lot of the players were crying.”

While preparing for the match, Monteith explained that it became an unspoken agreement among the team that their performance would be dedicated to his memory. Unwilling to stir sad emotions within the camp, he explained that they did not speak on the matter extensively, but rather, they wore black bands on their arms and felt that a win would be a great way for the team to send off someone they considered to be family.

“The boys wanted to win for him. We didn’t want to put them under too much pressure, but we allowed them to handle things their way, and when victory was delivered, we certainly honoured his memory,” he said.

Monteith himself was personally stricken with the news of Thomas ‘ passing. He explained that he had been coaching Thomas since he was just a young man in high school learning the sport.

“Leon was a truly hard-working individual. Very committed and dedicated to his sport and his family. I’ve been coaching him since high school, when he was at Calabar [High School]. It was through his hard work that, eventually, he broke through to earn three caps for the national team,” he reminisced. “Many persons would not have thought he would have got that far, in terms of representing his country, but his hard work had set him apart.”

Thomas, who played as the team’s playmaker, was described as the type of player who would come on and bring boundless energy to the game . He was a member of the team that beat Canada at The UWI Mona Bowl in 2017.Monteith hopes that in the wake of Thomas’ passing, many more local players will be inspired to work even harder in his memory as the team moves forward.