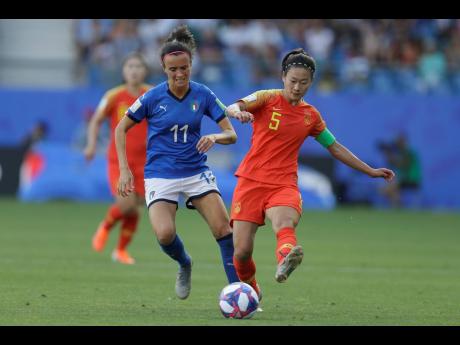 Valentina Giacinti and Aurora Galli scored and Italy earned their first appearance in the quarter-finals of the Women’s World Cup since 1991 after beating China 2-0 yesterday.

Giacinti created and finished off her 15th-minute opener before Galli’s long strike put the result beyond doubt four minutes after half-time at the stiflingly hot Stade de la Mosson.

Playing in their first World Cup in 20 years, Italy have proven to be one of the revelations of the tournament by making the final eight after winning their group ahead of Brazil and Australia.

Italy will play either Japan or the Netherlands on Saturday in Valenciennes.

China had only allowed one goal in their three group stage games but the talented Italian attack broke down the vaunted defence.

Galli scored after coming on to replace striker Cristina Girelli, who walked off the field late in the first half with an apparent leg problem.

But it was Giacinti who was a force in the early stage of the match.

While Girelli and Barbara Bonansea had combined for five goals in the group phase, Giacinti had yet to score in the tournament.

She threatened on two other occasions yesterday before finally finding the back of the net. She thought she had struck an early goal but it was ruled offside. Another shot swerved wide of the post after Bonansea intercepted a poor pass by a Chinese defender.

Giacinti then produced the chance that led to her opening goal. After pressuring to win a ball near the touchline, she raced down the flank and found Bonansea, who waited to find left back Elsa Bartoli joining the move. Bartoli’s shot was blocked by China goalkeeper Peng Shimeng, only for Giacinti to pounce on the loose ball and drive it home.

China midfielder Wang Yan did manage to make Italy goalkeeper Laura Giuliani palm her effort over the bar in the 28th minute.

But Peng then had to dive to parry a powerful strike from Valentina Bergamaschi as Italy looked close to a quick second goal against a China team that couldn’t handle their press and their trio of attackers.

Once China settled down and eliminated sloppy passes, the action tilted momentarily to the other half. Forward Li Ying gave Bartoli fits with her dribbling and she made the Italian defenders work with her dangerous crosses.

Italy suffered a bigger blow when they lost Girelli in the 39th.

She was replaced by Galli, who surprised Peng with a right-footed strike that went skimming over the turf and beyond the goalkeeper’s reach.

It was Galli’s third goal of the tournament. She got two in a 5-0 rout of Jamaica, also as a substitute.

China pushed for a goal to spark a comeback, but centre backs Sara Gama and Elena Linari kept Giuliani from having to make any significant saves.

Italy have scored nine goals in their three wins in the tournament.

The Italians also maintained their stingy defense with a second clean sheet. Both goals they have conceded so far came on penalties.