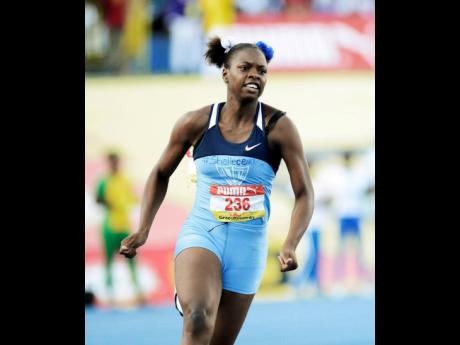 ‘Whyllo’, as he will be called for the purpose of this exercise, is an avid reader of this column. The search was on for a headline for this week’s effort, provided that the sports editor would permit such an intrusion into his exclusive domain. There was self-satisfaction with a particular choice by the writer, but Whyllo, to his everlasting credit, came up with a most appropriate alternative. It is ‘Kevona (Davis) needs an Ato (Boldon) in her career’, and that will be the theme that underpins the thoughts of this week’s episode of Foster’s Fairplay as the ups and downs of the performances of this most talented high-school athlete are examined.

Firstly, it must be said that there is absolutely no intention to undermine Michael Dyke or in any shape or form disrespect this coach, who boasts an outstanding record in producing athletes of genuine quality at the Edwin Allen Comprehensive High School, where Kevona is based. However, after three years of disappointments, it is time for the type of action which does not currently seem to be in place. It might be highly contentious, unacceptable to many, and in conflict with ­normal practice. However, Foster’s Fairplay sees it as a proper ­prescription to tackle this malady.

During the time under scrutiny, Kevona has been three times a double sprint champion in Classes Three and Two at the ISSA/GraceKennedy Boys and Girls’ Athletics Championships. In 2017, she made the team to the World Under-18 Championships and got injured just prior to finishing a bronze-medal 100m final effort. She took no further part in the event. Last year, after another brilliant early season, she was pulled from all competitions, including Trials for the World Under-20 Championships and, by extension, the event itself. Lest it be forgotten, it was Briana Williams who claimed both sprints there in Tampere, Finland, and who has been the toast of the sport at the youth and junior age groups since. To date, despite all the accolades and the rewards given to her, Briana has never bettered Kevona in head-to-head competition.

2019 was a lot worse as after another sterling, gilt-edged Champs performance, and although there was no announcement of injury problems, the signs were clear. Meet after meet, calls from Kevona’s camp were that she was ready to run, only to have a succession of last-minute cancellations, leaving track and field fans in a quandary regarding what was really happening to the young star-in-waiting. She had been called upon to compete sparingly during the season, and it was felt that all this would set her up for the real challenges of competing in the senior ranks when it was time for Trials for the Doha World Championships in late September.

The proverbial straw that broke the camel’s back came last weekend when, according to knowledgeable pundits, despite looking good in pre-race preparations, she failed to face the starters in the heats of the 100m. Can any ­meaningful inference be drawn from the fact that she was entered in the same ­qualifying heat as the much-talked-about Briana, who was now on the crest of a wave and on the verge of distinguishing herself further by gaining an individual spot for the 100m in Doha? A few weeks before, Kevona had false-started at an All Comers Meet, and the talk making the rounds was that she succumbed to the pressure of running for the first time against seniors, as was the case then. Were these the same dynamics at play for what was to be her first foray into a race inhabited by adults?

One can go on and on in a speculative vein, but the inescapable truth is that this rich talent seems to be in dissolution mode in front of our eyes. The now hackneyed saying, “give her another year, she is still young,” has worn thin. The question which takes priority following all these mishaps should be, “How can Kevona be rescued from a lukewarm ending to what was promised by her early showing?”

Former 200m World champion Ato Boldon is working miracles in the career of Briana Williams. After cementing her eligibility for the 100m in Doha, no one should even question how much of a positive influence Boldon has been in her career. It might be revolutionary, but it worked for Usain Bolt and Yohan Blake in the Glen Mills Racers Club camp for some time. Why can’t Boldon be consulted to orchestrate the success for which Kevona should be yearning? This is not to say that he should be her coach as a consultant does a lot more than that. Surely, he has the ability and insight to guide a process that should have a significant impact on what Kevona is able to put on display.

Foster’s Fairplay is not lacking in appreciation of the inherent problems which could emanate from such a situation, but there seem to be even more hurdles which Kevona’s camp is unable to surmount. What is happening, or, better put, not happening there should not be allowed to continue.

Who knows whether Whyllo was serious or not? Who cares? Whether or not it was a wild thought, a seed sown with little hope of germination has sprouted roots. If Boldon says a firm no, then so be it, but is it not worth a try? The Trini speedster, now a productive coach, seems to have the answers which do not appear to be available within the camp of the nation’s junior sprinting hopeful.