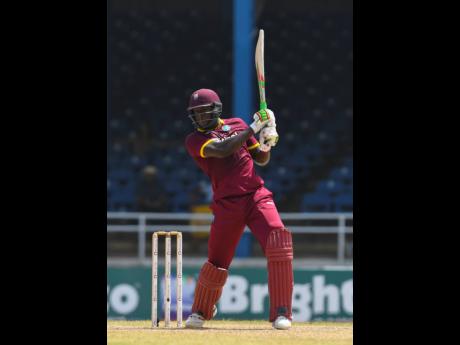 Former West Indies captain Clive Lloyd believes Carlos Brathwaite can be among the best all-rounders in the world but needs to show the consistency required to get to the highest level.

Brathwaite smashed an amazing 101 off 82 deliveries last Saturday as West Indies went down by five runs to New Zealand in a nerve-jangling World Cup encounter in Manchester.

The hundred was his first in international cricket, and Lloyd said it spoke volumes about Brathwaite’s potential.

“I’m hoping that after his hundred against New Zealand, Carlos Brathwaite realises that he can be as good as any all-rounder in the world,” Lloyd wrote in his tournament column.

“He hits the ball so well and is a top-class cricketer; he’s not a T20 player alone, as his performance at Old Trafford demonstrated.

“There’s no doubt in my mind that Carlos can make big scores and win games for the West Indies, but now he needs to turn his potential into reality.”

West Indies’ batting has been generally under par for the tournament, and Brathwaite’s century was the first of the campaign for the Caribbean side.

Asked to chase attainable totals of under 300 against Australia and New Zealand, West Indies’ batting came up short on both occasions, resulting in two of their four defeats in the tournament to date.

Lloyd, who presided over West Indies’ World Cup successes in 1975 and 1979, said the Caribbean side’s batsmen needed to follow the example set by New Zealand’s Kane Williamson in terms of constructing innings in one-day cricket.

Williamson stroked a magnificent 148 against West Indies to lift his team out of trouble at seven for two in the first over. The knock followed up his unbeaten 106 against South Africa three days earlier.

“Everyone in this tournament is making hundreds, but it says a lot that Carlos is the only West Indies player so far to do so,” Lloyd pointed out.

“We have the talent; it’s just a case of pushing on and batting long. In that regard, they need to look at the example set by Kane Williamson. The New Zealand captain didn’t break sweat at all and just knocked it around on his way to a match-winning 148.”

West Indies lie eighth in the 10-nation standings on three points and face India tomorrow in their next match at Old Trafford.